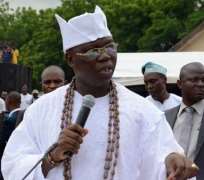 With the pronouncement of Gani Adams as Aare Ona Kakanfo; the Yoruba pressure group, Oodua Peoples Congress, OPC has said that Adams will no longer preside over the affairs of the group.

In a press statement, jointly signed by Comrade Razak Arogundade and Comrade Dare Adesope and made available to journalists in Lagos, the duo stated that Alaafin of Oyo, Oba Lamidi Adeyemi made Adams Aare Ona Kakanfo to pave way for OPC to become one.

“Our special appreciation goes to Alaafin of Oyo, Oba Lamidi Adeyemi III for his continued support towards making OPC one and also his recent pronouncement of Otunba Gani Adams as Aare Ona Kakanfo of Yorubaland. We remember with nostalgia that it was in the month of October, October 29, 2016 that our father, Iku baba yeye, Alaafin of Oyo, Oba Lamidi Adeyemi III was present and also the royal father of the day when Comrade Dare Adesope was accorded the leadership/ President of OPC Reformed, at De Blue Roof Hall, LTV 8, Agidingbi, Lagos. As a show of solidarity, Comrade Razak Arogundade of OPC New Era was also in attendance to show how serious both groups were committed to harmonisation. We believe that it was done owing to the fact that there is need for reformation within the group and couple with the fact that Dr. Fredrick Faseun has attained retirement age as leader of the Yoruba determination group. Coincidentally, it is this same month of October that Alaafin of Oyo pronounced Otunba Gani Adams as Aare Ona Kakanfo of Yorubaland; a position that has compulsorily retired Gani Adams as OPC leader.”

It added: “In as much as we have our reservations with the choice of Adams as Aare Ona Kakanfo; we have no doubt in the wisdom of our father, Alaafin of Oyo. We believe it is in the best interest of Yoruba race that Gani Adams who had hitherto being a cog at unifying OPC into one has been compensated with the title of Aare to pave way for one OPC.”

The Group further stated that it is working round the clock to ensure that all factions of OPC come together as one.

It added: “While this process is ongoing, we will like to commend all Yoruba Obas, traditional leaders, Yoruba leaders and all sons and daughters of Yorubaland who have identified with both groups toward making Oodua Peoples Congress, OPC one. We believe that the eras OPC Dr Fredrick Faseun and OPC Gani Adams have gone. A new chapter has just been opened by OPC New Era and OPC Reformed.”

“Today, we have started working to ensure that the disunity that hindered the group and which both former leaders have individually benefited from is now a thing of the past. We have agreed to put our differences aside and work together to abolish factions in the OPC.

While Dr Fredrick Faseun has given support for OPC to become one; we urge Otunba Gani Adams to toe the line of honour by supporting us to make OPC one devoid of any rancour.”

The Group called on Adams to tender apology to the families of those who lost their lives while he was engaging Dr Fredrick Faseun in supremacy war.

“We equally urge Gani Adams to tender unreserved apology to the families of all Yoruba sons and daughters whose lives were lost while engaging in superiority battle with Faseun.”

“Lastly, we are calling on all OPC factions and all other Yoruba self determination groups to come together in the interest of Yoruba