AFENIFERE TASKS JONATHAN, OTHERS ON GOVERNANCE 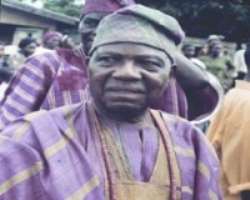 THE Yoruba socio-political organisation, Afenifere, rose from an extra-ordinary meeting in Akure, Ondo State capital, yesterday with a call on political leaders to steer Nigeria from the course of becoming a failed state by repositioning the country to reflect the dreams of its founding fathers.

According to a statement released at the end of the parley, which held at the residence of its leader, Chief Reuben Fasoranti and was attended by representatives from all the states of the South-West as well as Kogi, Kwara and Itsekiri delegates from Delta, there was 'the need to collectively review the state of the Nigerian nation, dissect its predicaments and proffer suggestions that would move our country forward.'

The group congratulated Dr. Goodluck Jonathan on his emergence as President 'and hopes that this man of destiny will have the courage and determination to steer the ship of state in a transparent and selfless manner.'

The statement, signed by Femi Okurounmu, Afenifere's General Secretary, said 'the meeting noted the drift of the Nigerian state which is on the verge of being a failed state, the collapse of its manufacturing base, the disrepair of infrastructure and educational institutions, insecurity of lives and property across the land, and the endemic corruption in all facets of public life and the continued threat to democracy and the manipulation of the electoral system.

'The meeting resolved that we should stop to pay-lip-service to the eradication of these so many ills; especially corruption at all levels of government, and instead, we should confront the problems head on with courage and determination.

'We condemn the baseless move to increase electricity tariffs in the country; instead the government should concentrate on improving electricity supply to end the traumatic situations of Nigerian at the moment. The government must conclude the unbundling of PHCN and the deregulation of the power sector to ensure that more players can compete freely in the sector.'

The statement continued: 'The meeting noted the efforts of government on the amnesty programme in the Niger Delta area. We want the Federal Government to justify the trust and faith of the citizens of the region by implementing sustainable programmes that will address the infrastructure deficiencies in the Niger Delta, which will guarantee the well-being of the average citizen in the area.

'The meeting noted the various reconciliation moves between the Progressives in the South-West and urged all Progressives currently scattered across different platforms to come together and form a united front capable of giving birth to the Nigeria of our dreams.

'We acknowledge the efforts of our leaders at forming a united front to contest the forthcoming elections and hope that the idea of a formidable party would soon come to fruition so that our teeming followers, especially the young generation would have the opportunity to offer themselves for service to their people under the umbrella of the renowned progressive value system.

'The meeting called for deliberate action to fast-track the reform of the electoral system and its laws, as well as the review of the constitution of the Federal Republic to ensure credible, free and fair elections that would enthrone genuine democracy and enhance the image of the country nationally and internationally.'