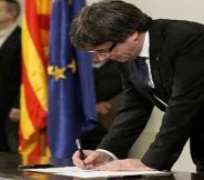 The Spanish government has said the deposed Catalan president, Carles Puigdemont, could be jailed within the next two months over his part in the regional parliament's unilateral declaration of independence .

The warning came on Sunday afternoon as hundreds of thousands of people took to the streets of Barcelona to call for Spanish unity two days after some Catalan MPs voted for independence and the Spanish government assumed control of the region .

Spain's prime minister, Mariano Rajoy , has sacked Puigdemont and his government and called regional elections for 21 December. In an interview with the Associated Press, the country's foreign minister, Alfonso Dastis, said Puigdemont could “theoretically” run for re-election in the vote if the courts decide he should remain free until then.

Spanish prosecutors said on Friday that they would file charges of rebellion against Puigdemont, a crime punishable with up to 30 years in prison. “I don't know what kind of judicial activity will happen between now and 21 December,” said Dastis. “If he is not put in jail at that time I think he is not ineligible.”

Dastis told Catalan separatists to “think twice” before rejecting the election as it “will be held according to the law. So the results will have to be respected afterwards.”

He did, however, hint that there could yet be negotiations over a new deal for Catalonia . “I rule out full independence but not necessarily more autonomy, even if they are now already one of the regions with the highest powers and competences not only in Spain but in the world at large,” he said.

Sunday's demonstration, which was convened by the anti-independence group Societat Civil Catalana, saw a huge crowd mass in central Barcelona. Organisers put attendance at 1.3 million, while the city's police said 300,000 turned out. Another pro-unity protest this month drew similar numbers.

People with Spanish flags tied around their necks congregated on the Passeig de Gràcia, one of Barcelona's main thoroughfares. Others carried white banners with the flags of Catalonia, Spain and the EU surrounded by a heart.

The event's slogan was “We are all Catalonia. Common sense for coexistence” and drew people from the region and beyond as well as members of the Spanish government and pro-unity Catalan MPs.

Arrimadas said the time had come to “restore Catalonia's institutions” and prepare for the December elections.

Juan Montalvo, 65, a retiree from Mataró, a town 2o miles from Barcelona , had travelled to the protest with his 29-year-old son Roger.

“We've come to give our opinion and show that part of Catalonia feels Spanish as well,” he said. “Catalan society is divided. We need to achieve more unity, but also to show [pro-independence Catalans] that we are 50% and they need to respect us like we need to respect them.”

Montalvo, who was born in Extremadura, said he felt increasingly like a Spanish immigrant even though he speaks Catalan and is married to a woman from the region. His son added: “I feel Catalan, but for me that means being Catalan inside a Spanish state.”

Some protesters shouted: “Viva España” while others vented their anger at the region's sacked president, chanting: “Puigdemont to prison!”

Despite the Spanish government's unprecedented use of article 155 of the country's constitution to take control of Catalonia's civil service, police, finances and public media, some pro-independence politicians have refused to recognise the measures.

“We cannot recognise the coup d'état against Catalonia, nor any of the anti-democratic decisions that the PP is adopting by remote control from Madrid,” he said. “The president of the country is and will continue to be Carles Puigdemont … at least until the day the citizens do not decide otherwise in a free election.”

However, Junqueras also said that decisions would have to be made over the coming days that “won't be easy to understand”, adding that the independence movement would push onwards “without ever giving up ballot boxes to validate the republic”.

On Saturday, Puigdemont said efforts would continue “to build a free nation”, adding: “We must do so resisting repression and threats, without ever abandoning, at any time, civic and peaceful conduct.”

Dastis dismissed such calls, saying any attempt by Puigdemont or his allies to continue in office this week would prove futile as regional civil servants would not heed their instructions.

“If he wants to live in a parallel universe he may go on, but nobody, I think, is going to obey him,” said Dastis. “No matter what he says, the central government is now in charge of Catalonia, although we have clearly decided we don't want to be there for the long run.”

While the Spanish government has sacked the Catalan government and as many as 150 officials, it remains to be seen to what extent it will take over the running of the civil service, which includes about 200,000 employees in the administration, health and social services and education.

Employees of the Generalitat, the Catalan government, told the Guardian they had not received any instructions or warnings of the changes might lie ahead, although there had been some informal meetings by staff worried about the implications of article 155. Nor had anyone in the Barcelona provincial government department received official notification.

School headteachers and inland revenue employees also said they had not received any notifications.

In an open letter to all the police stationed in Catalonia – including the regional police force, the Mossos d'Esquadra – Spain's interior minister, Juan Ignacio Zoido, reminded all officers they had a duty to “obey orders, guarantee the rights of all, and fulfil the mandates” of both the Spanish constitution and the region's statue.

It is unclear whether Madrid plans to micromanage Catalonia or if it will let it run itself for the 53 days that remain before the election and, presumably, the resumption of regional autonomy.

Facebook Twitter Pinterest A man draped in a Spanish flag walks with a woman draped in a Catalan flag on their way to the rally. Photograph: Gonzalo Arroyo/AP

As the Spanish government prepared to implement its strategy, Belgium's immigration minister incurred Madrid's wrath by suggesting that Puigdemont could be offered asylum in the country.

“It's not unrealistic, looking at the current situation,” Theo Francken, a member of the Flemish separatist N-VA party, told the Flemish-language broadcaster VTM on Saturday. “Looking at the repression by Madrid and the jail sentences that are being proposed, the question can be asked whether he still has the chance for an honest court hearing.”

Belgium's prime minister, Charles Michel, later clarified that an asylum request from Puigdemont was “absolutely not on the agenda”, while a spokesman for Rajoy's Partido Popular described Francken's remarks as “unacceptable” and said the Belgian minister had levelled “serious accusations against Spain's legal system” that required an immediate correction.