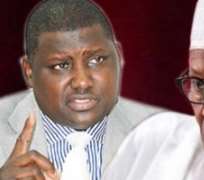 The Presidency on Thursday said an Abuja Magistrate’s Court as well as the International Police (INTERPOL) had issued fresh warrants for the arrest of the embattled former Chairman of the defunct Presidential Task Force on Pension Reforms, Mr. Abdulrasheed Maina.

The Senior Special Assistant to the President on Media and Publicity, Garba Shehu, disclosed this in an interview with our correspondent.

Shehu said Maina’s investigation had been extended beyond his reinstatement and subsequent posting.

He said the investigation would even be extended to some foreign countries.

The presidential spokesman said, “Maina’s investigation has been expanded. This is beyond reinstatement. It has gone beyond that.

“You know that the INTERPOL has just issued an international warrant on him. A Nigerian court has also issued yet another warrant of arrest.

“All those cases involving Steve Oronsaye (former Head of the Civil Service of the Federation) that are ongoing, you know Maina is also involved. Law enforcement agencies are looking at that too.

“You are also aware that the Senate is also carrying out its own investigation on the matter.

“The matter is being investigated from all fronts. The EFCC, for example, is discovering more and more properties and its officials are sealing them. They are also looking at banks and all that.

“In fact, this investigation will also touch some foreign countries.”

Shehu said the security agencies, including the Attorney General of the Federation, Abubakar Malami (SAN), were making presentations to the President on the matter.

He, however, said the President had yet to say the final word on the matter because he wanted to be fair to all the reports.

It would be recalled that Maina’s family had insisted that their son was recalled to civil service by the Buhari administration.

The presidency had, however, denied any complicity in the fugitive’s reinstatement.