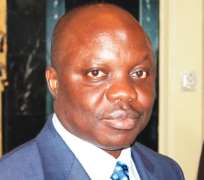 The news reaching our political desk, has it that the immediate past governor of Delta State, Dr Emmanuel Eweta Uduaghan and the member representing Warri North in the Delta State House of Assembly (DTHA), Michael Diden, fondly addressed by his admirers as Ejele, are allegedly battling for the soul of the Delta South Senatorial District on who represents the district in the National Assembly (NASS), come 2019.

The duo who are of the Itsekiri extraction, are also from the ruling Peoples Democratic Party (PDP) in the state.

It was gathered that following the alleged tensed free-for-all ensuing between the two brothers, Uduaghan’s predecessor and cousin brother, Chief James Onanefe Ibori, unsuccessfully waded into the political brouhaha.

An impeccable source said, Ibori, had invited the pairs to the Very Important Person (VIP) Lodge of the Government House about three weeks ago with the sole aim of allegedly pressurizing Diden, to step down for Uduaghan, a move that was vehemently opposed by the House member.

According to our dependable source, Diden was quoted to have asked Uduaghan to give him strong reasons why he should step down for him ahead of the senatorial race.

“Why should I step down for you? When you were the governor, what did I benefit from you? Were some of the posers Diden was quoted to have put across to Uduaghan in the parley meeting which was deadlocked.

“Ibori was confused, he couldn’t say anything. He got tired of the whole drama”, our source alleged further.

An associate of Diden (name withheld) whom our correspondent contacted to speak on the development declined comments while our correspondent at the time of filing in this report could not get across to Uduaghan for his reaction.