Tragedy Looms as Multi-Religious Nigeria is Touted as an Islamic Republic.... 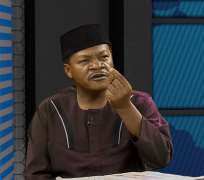 The document which is commonly referred to as the ‘1999 Constitution of the Federal Republic of Nigeria’, though in reality merely the appendix to a Military decree, upon which the Nigeria state is predicated and governed, proclaims unequivocally, the secular status of the Nigerian federation. With the litany of ethno-sectarian conflicts which have led to the deaths of countless thousands, particularly in Nigeria’s northern region, the palpable heightened degree of sensitivity and apprehension amongst Nigerians regarding any actions by government to tilt the polity towards any of the two main religious bodies should suffice to curb any intentions at creating a semblance of foisting a State Religion on Nigerians or nuances that may create the impression of domination by one religion over the other.

When however, a subsisting regime, enmeshed in an aura of self-created invincibility, all-knowing and we-have-them-by-the-balls mindset, deliberately acts in manners that projects a secular state as being a one-religion state or ‘dominated’ by one religion, it is only a matter of time before the veil that has been so craftfully woven over the eyes of some who ostensibly for lucre and positions held, are willing to allow the macabre unconstitutional dance towards a mono-religion state. Then the agitations will overwhelm the already weakened contraption.

The irony inherent in the deliberate perpetuation of a falsehood that a secular state is ‘Islamic’ or ‘Muslim-majority’ is that, resulting from the absence of genuine theocratic structures and institutions, the State and those who decide to propagate and project such falsehood are perceived and treated as fraudulent by the wider international community. This is in addition to the fact that the basic expectations, from a religious perspective, of an ‘Islamic’ or ‘Muslim majority’ state will be absent.

In the instant case of Nigeria, the reality that a sizable percentage of national income is derived from Value Added Tax (VAT) levied on breweries for alcoholic products and to a smaller extent livestock (including pork meat) – sources considered as forbidden under Islamic tenets, and that such VAT proceeds are lumped into a national treasury which then gets ‘shared’ amongst Nigeria’s constituent levels of governments (Federal, States and Local Governments), questions the legitimacy, under Islamic teachings of deploying such public funds to Shari’a-compliant ventures, as would be expected of ‘Islamic’ or ‘Muslim majority’ States.

Under the ruling administration in Nigeria headed by a man, Muhammadu Buhari, who had severally professed a desire to ensure the application of Shari’a laws across a secular Nigeria, there have been brash efforts to position and posture Nigeria as an Islamic state. One of such brash actions has been the involvement of the Federal Government in promoting, championing and facilitating the SUKUK (Shari’a-compliant) Bonds, an unconstitutional move in itself since the Federal Government was deploying state resources in a discriminatory manner towards the promotion and elevation of a religious faith contrary to the provisions of Nigeria’s constitution.

Spurious and tenuous efforts have been made by Buhari’s government to douse the implications of the Federal Government involvement in a strictly religious financial instrument, such as the cosmetic positioning of the Governor of Nigeria’s Central Bank, Godwin Emefiele (a Christian) as the Chairman of the International Islamic Liquidity Management Corporation (IILMC). Most such diversionary acts amount to naught – as the ludicrous nature of such farce would have been laughable if not for the dire potent implications if the continuing religious slant the Nigerian polity is being forced to digress towards is not hastily corrected.

Not done with floating and dealing in the SUKUK Bonds, in yet another to-hell-with-you-guys stance, the occupant of the Office of President of the Federal Republic of Nigeria opted to attend a meeting of a so-called ‘D-8 Organization for Economic Cooperation’, a group comprised of the following Islamic countries: Bangladesh, Egypt, Indonesia, Iran, Turkey, Malaysia and Pakistan and, you guessed right, Nigeria.

How and when did Nigeria get into this D-8 group, which in its website affirms that the ‘idea of cooperation among major Muslim developing countries was mooted by Prof. Dr. Necmettin Erbakan, former Prime Minister of Turkey”? From what sources does the membership fees for such religion-based organizations emanate in a secular Nigeria?

When the above is juxtaposed alongside a very striking religion-based slant in leadership of state institutions and coming on the heels of Nigeria’s continuing membership of the Organization of Islamic Countries (OIC), it will take a spectacularly blind mind not to discern a worrisome pattern that if not stemmed early enough, portends dire outcomes.

There is nothing wrong with a people hobnobbing with whosoever they so desire to be with. When however an entire multi-ethnic and multi-religious contraption is by deceit, subterfuge, sleuth and all manners of vague posturing ensnared into being perceived, seen or become a religious state, a transgenerational catastrophe would have been ignited.

A holistic restructuring and renegotiation of the Nigerian contraption will spare all and sundry this looming tragedy.

Picture: Logo of the D-8 group.