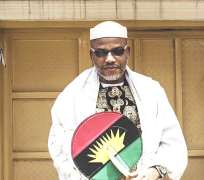 I have watched with utter dismay, the events that have unfolded in this country in the last three years. However, none of them gives me as much concern as the Biafran agitation, and the emergence of the self styled genius, Nnamdi Kanu.

Let me begin by saying that I am not just a full blooded Igbo man, but a full blooded Abian. I am a native of Umuahia-Ibeku, in Abia State, the same town and clan I understand Nnamdi Kanu hails from. So by the Nigerian societal standards, he may be considered to be my ‘brother’. But let us cast sentiments aside, because I am a keen student of the renowned social critic, Dr. Bala Usman of Blessed memory, who once said, and I quote: “if you are emotionally attached to your tribe or political leaning to the point that truth and justice become secondary considerations, your education is useless. Your exposure is useless. If you cannot reason beyond petty sentiments, you are a liability to mankind”.

I have tried to see the hero in the man Nnamdi Kanu, but the more I try to see the hero in him, the more the villain I see in him. Let us go back in time to history because history has a way of repeating itself. Unfortunately, people do not learn from it, until it must have taken a heavy toll on them.

From the little knowledge I have of history, I see a potential Adolf Hitler in Nnamdi Kanu. I will explain because I know that many would consider what I have just written to be offensive and seditious to this self acclaimed leader of the Igbos. Let us take an in-depth look at factors that led to the emergence of Adolf Hitler and see the similarities with the emergence of Nnamdi Kanu.

The First World War ended abruptly with the armistices day agreement of November 10, 1918. With this armistices day declaration, the guns of both the allied and central powers, which raged against each other for four years, suddenly fell silent. Of all the countries that participated chiefly in that conflict, Germany which was one of the central powers became the most disenfranchised. The Abrupt end of that tumultuous conflict on armistices day left her more embittered than she was before the war. The retributive measures against Germany at the treaty of Versailles made matters even worse for her. First of all, the treaty spelt out that the numerical strength of her army which was about 350,000 strong be reduced to 100,000. Added to that Germany was forced to give up her territories and colonies within and outside Europe, including her colonies in Africa, which were given to her at the Berlin conference of 1885. Colonies like parts of Adamawa and Taraba States of Nigeria and the entire present day Cameroon, Togo to the west of Africa, Namibia to the south of Africa, and territorial gains she had made through the military exploits of her distinguished General resident in Africa, Lettow Von Vorbeck. Her issues became much more compounded when she was asked to pay reparations, even in the midst of a terrible economic depression. An economic depression that saw her paper Mark currency increase in leaps and bounds to the Dollar from 48 paper Marks to a Dollar, to 90 paper Marks to a Dollar, to 330 paper Marks to a Dollar, to 7,400 paper Marks to a Dollar and then finally 4.2 trillion paper Marks to a Dollar. Her paper Mark currency would eventually be replaced with the Rentenmark or Mortgage Mark, after it had been rubbished to the point of being used as wall paper in many homes.

A time like this became the most ideal time for Adolf Hitler to seduce the hearts of the German people with his ideology of Aryan supremacy. This ideology strengthened the Nationalist cause of gullible Germans who had come to see Hitler as a messiah of some sort. Only very few Germans saw through the monster (Hitler), and some did in fact plot his downfall. Many German intellectuals, Priests, Pastors, highly educated men and women and people you least expected to pay the least attention to him, found themselves carried away. He whipped up sentiments that had long been forgotten, and incited the hatred of ethnic minorities like Slavs, Poles, Roma, and Jews. He played the blame game by blaming Germany’s loss of World War I on the Jews. Six million of whom would be decimated by him and his cohorts. It was at the tail end of the war, and the twilight of his Reich (Republic) that many Germans began to see the monster in him. But it was already late, since so much collateral damage had been done. Germany was bombed repeatedly by the Allies, and later partitioned into East and west.

The agitation for the Biafran sovereign State by Nnamdi Kanu is coming at a time when most Nigerians; be they Igbos, Yorubas, Hausas, Tivs, Ijaws, Kanuris, Efiks and so on are disenfranchised and frustrated to the utmost with the failed Nigerian State. But unfortunately, we Igbos have been made to see ourselves as the hardest hit by the pervasive injustice in the land. Sentiments have been whipped up by the gory images of Igbos killed about half a century ago. There is now a sudden wave of Igbo Nationalism, which has been strengthened by inflammatory remarks made by way of broadcast over a radio station known as radio Biafra. Now, let me talk a little about radio Biafra. I’m not particularly against the Biafran ideology, after all the American civil war ended in 1865 with the defeat of the confederate States. A hundred and fifty two years after this historic conflict, the confederate ideology still exists. Even with the oneness of the United States, people in the south still hoist the confederate flag. What I find most disturbing are the inflammatory remarks of Nnamdi Kanu through his radio Biafra station. This radio station has been used to incite a lot of Igbo youths, many of whom would take to arms if they had the opportunity. Let us remind ourselves once more of how the massacre of Tutsis by Hutus started in Rwanda. It all started with a radio broadcast in which Tutsis were described as cockroaches by whoever the broadcasters were. Like I said earlier, history has a way of repeating itself, and men do not learn from it. They only learn the hard and costly way, when it must have taken a heavy toll on them. I consider Nnamdi Kanu’s radio broadcast to be reminiscent of the uncensored radio broadcasts in Rwanda that led to the genocide. Not even Priests, men and women of God, distanced themselves from the unholy radio broadcasts. They found themselves deeply overwhelmed by the ranting of the broadcaster to the point that they participated fully, either directly or indirectly in the genocide.

I would like us all to know that the worst kind of hate on the surface of the earth is ethnic/religious hate. History is replete with such instances like the annihilation of 1.5 million Armenians by the Ottoman Turks in 1915, the ethnic cleansing of Tutsis by Hutus, the decimation of the Nama and Herrero tribes of Namibia by the colonial Germans, etc.

Ethnic hate can make a sane and decent man or woman kill an innocent baby or child simply because they were from the despised ethnic group. There were pogroms against Igbos in Northern Nigeria in 1945, 1953, and 1966. Those dark parts of our history should not rear up their ugly heads again. As time goes on, the wounds begin to heal until they are healed completely. The Jews may reminisce over their slain in the holocaust, but they have not for that reason declared war on Germany. The nations of Israel and Germany both have a good working relationship today.

Also, I have read about and seen freedom fighters who fought for the emancipation of their oppressed people. There are historical records and accounts even from eye witnesses of the positive antecedents of Nelson Mandela, Mahatma Gandhi, Martin Luther King Jr, James Bevel, Leo Tolstoy, Gerry Adams and a host of others. There were characteristic features deposited in all these men which I see to be absent in Nnamdi Kanu. To mention one or two, one could visibly see what these men fought for. It was clear and evident that their people were oppressed. But one cannot visibly see what Nnamdi Kanu is fighting for. The injustice in the land is generic and pervasive. Also the agitations made on behalf of the Igbos are in my opinion, elitist agitations. Examples are the agitations for Igbos to get better federal appointments, the presidency and so on, which in the long or short run do not benefit the Igbos but individuals and nuclear families. Until we come to point of realizing that our elites exploit our ethnic and religious cleavages in order to foment strife, we may never fully diagnose the source of our problems.

Over the centuries, Europeans fought many wars. Examples abound like the war of Spanish succession, the war of Austrian succession, the seven years war, the thirty years war, the hundred years war, the eighty years war, the Napoleonic wars and so on. They never came to the point of realizing that most of these conflicts that came in a global scale were caused by their monarchs, until after World War I. Over the centuries their monarchs kept sending them to the battle fields to die, whilst they married and inter-married themselves in grand style and opulence. When the commoners of Europe finally realized the cause of their problems, World War I, had already taken its toll on them on an industrial scale. As a result, Germany got rid of her Kaiser, Wilheim II, Russia got rid of her Czar, Nicholas II, Austria got rid of her Arch-Duke, the Ottomans got rid of their Sultan, Mehmet VI, etc.

Monarchs that still exist in Europe have been relegated to a ceremonial status. Today the Frenchman can live side by side with his English rival, the Austrians can live comfortably with their traditional French enemies, and so on. All these would not have been possible if their totalitarian Monarchs were still in control.

I will end this write up by sincerely hoping that Nnamdi Kanu and his accomplices from the other geopolitical zones of the country do not draw us to the brink of another civil war. My fellow Nigerians take note.