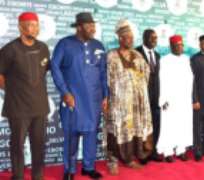 Governors of the Southern States of Nigeria on Monday in Lagos unanimously lent their weight behind the call for true federalism and devolution of powers to States.

The Governors, who were meeting under that canopy for the first time in 12 years, also  agreed to collaborate with one another for the growth and development of their economies.

In a communique read by the host governor,  Governor Akinwunmi Ambode,  said the governors  emphasized priority on security and lives and property of citizens of the regions, while also resolving to work on effective linkage on good infrastructure across the 17 States in the region.

At the meeting, Governor Ambode was unanimously appointed as the Chairman of the Southern Governors Forum (SGF) while Governors Seriaki Dickson of Bayelsa and David Umahi of Ebonyi States were appointed as Co- Chairmen of the Forum.

The Forum also scheduled the next meeting for Port Harcourt in a yet to be announced date.

Earlier, Governor Ambode, while welcoming his colleagues to the meeting, reflected on the clamour for true federalism and devolution of powers, saying that states will benefit from the envisaged restructuring.

He said the goals of true federalism, which included the strengthening of autonomy and the enhancement of fiscal viability will enable the states to develop at their own pace and based on their peculiarities. He said the forum had achieved an increased awareness on the sustenance of the national question germane to peaceful co-existence in the country. However, he said there is a lot to be done and achieved, stressing that true federalism required urgent, meticulous and proactive attention by the forum. Ambode frowned at what he described as the non-periodic review of the revenue formula as provided by the constitution to reflect evolving realities.

He said the review is crucial to enhance the viability of states and local government and their capacity to fulfil their developmental roles in the polity. The governor added: “States are disparaged for always carrying begging bowls to Abuja in quest of hand-outs from the Federal Government. This is a function of our present national constitution that burdens the Federal Government with activities and responsibilities that rightly fall within the province of states.

“The productivity and revenue-generating capacities of most states are thus stifled, thus turning them into no better than street beggar states incapable of even meeting routine obligations of paying workers' salaries and pensions without federal support.”

Ambode recalled that Lagos State had fought and won several legal battles since 1999 that have systematically strengthened her autonomy and enhanced her fiscal viability. He noted that the state had won the legal control over the management of its environment, the control of urban and physical planning, the regulation of overhead masts, the registration and regulation of hotels and restaurants, and the control of inland waterways.

Gov. Rochas Okorocha of Imo State was however absent at the summit.