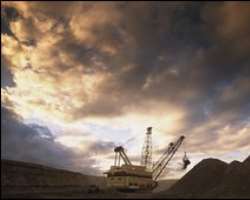 The proposed tax has angered the mining industry
Mining group Xstrata has halted investment in two projects in Australia because of the government's proposed new tax on mining profits.

It said it was shelving investment worth 586m Australian dollars ($500m; £338m) in two mines in Queensland.

The investment is part of a planned A$6.6bn development in both of the projects, which Xstrata said would have created 3,250 new jobs.

Australia's government is planning a 40% tax on mining profits from 2012.

Last month, Australian iron ore miner Fortescue Metals threatened to abandon $15bn (£10.2bn) of new projects unless the plans for the mining tax were watered down or axed.

Its review includes investment projects worth a total of A$22bn, which Xstrata says have the potential to create 14,725 jobs.

Xstrata said it was suspending – with immediate effect – investment in its Wandoan thermal coal project and in a development to extend the life of the Ernest Henry copper mine.

“The RSPT has created significant uncertainty for the future of mining investment into Australia and would impair the value of previously approved projects and exploration to the point that continued investment can no longer be justified,” said Xstrata chief executive Mick Davis.

Both the Wandoan coal project and the Ernest Henry copper mine are in Queensland, which is Prime Minister Kevin Rudd's home state.

Mr Rudd said Xstrata's move was part of “what will be the normal argy-bargy of a very tense debate between parts of the mining industry and the Australian government”.

“This government will not be intimidated by the statements of any mining company, foreign or domestic,” he added.