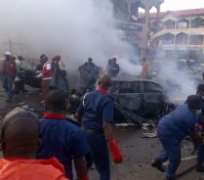 A suicide bomber has killed 13 other people in the restive northeastern Nigerian city of Maiduguri on Sunday.

There was no immediate claim of responsibility for the attacks, but officials suspect Boko Haram the militant group is behind the violence.

Boko Haram has killed more than 20,000 people during in its eight-year insurgency against the Nigerian government in a bid to create a strict Islamic state in the majority Muslim north. Maiduguri, the capital of the state of Borno, is the birthplace of Boko Haram.

A report issued last month by the human rights advocacy group Amnesty International said at least 223 civilians have been killed at the hands of Boko Haram since April, including 100 civilians killed in August alone. The deadliest attack occurred on July 25, when 40 people were gunned down in an ambush on an oil exploration team in Borno State. Amnesty says the “real figure may be higher, as some attacks may have gone unreported.”

It said the violence from Boko Haram has led to millions of civilians across the Lake Chad region in need of humanitarian assistance. A total of 2.3 million people have been displaced in Nigeria, Cameroon, Chad and Niger, and more than seven million face serious food shortages.