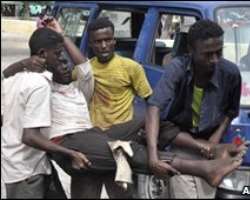 Civilians were caught up in the cross-fire during Thursday's fighting

Clashes between Somali government forces and Islamist militants have killed at least 17 people and wounded about 60 in the capital Mogadishu.

The fighting appears to be the start of a government offensive using troops trained in Ethiopia, analysts say.

The government controls only a few parts of the country.

Backed by African Union troops, it is trying to quash al-Shabab – an al-Qaeda-inspired group that control much of southern Somalia.

As well as Ethiopia – which officially withdrew from Somalia's conflict in early 2009 – Uganda is also believed to be training Somali soldiers ahead of the current offensive.

Meanwhile, the US – a key ally – has provided funding and logistical support.

Premature celebration?
Reports suggest the operation has been successful in taking back key districts in the north of Mogadishu – near the presidential palace – from the militants. However many civilians are thought to be among the dead.

“The Somali government forces advanced on the terrorists' strongholds,” a government official told AFP on Thursday.

“They took control of several neighbourhoods which had been held by the rebels… There are several bodies strewn across the streets,” said the official, Colonel Ahmed Ibrahim.

But he adds that it is too early for the government to celebrate, as Somalia is still in effect a failed state. It has not had a functioning administration since 1991.

Hundreds of thousands of people have fled their homes in two decades of conflict that has created one of the world's worst humanitarian emergencies.

Al-Shabab and other Islamist insurgents have imposed a strict form of Sharia, or Islamic law, in areas they control.