Why another attempt at power devolution may fail: Saraki 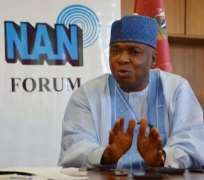 The President of the Senate has disclosed that overheating discuss on the devolution of power might stall another attempt to get it passed in the Constitution Amendment process.

Saraki disclosed this to newsmen during the 137th Inter-Parliamentary Union(IPU) Assembly in St. Petersburg, Russia on Tuesday.

The National Assembly had in the course of voting for amendment of the 1999 Constitution, on July 26, rejected devolution of power.

The rejection was the outcome of electronic voting on the bill to alter the second schedule, Part I & II of the Constitution, to move certain items from the Exclusive to the Concurrent Legislative List to give more legislative powers to states.

Saraki called for dialogue, saying it was the best approach to getting Nigerians to see the benefits of devolution of power to all, rather than bullying any part into amending the Constitution in that regard.

“Constitution amendment is such that we need the collaboration of everybody and it is always through dialogue not intimidation. We have to come to the table in a peaceful and friendly atmosphere.

“As I have said many times if we had had this amendment about nine months ago, devolution of power would have passed.

“I am hoping that things will calm down a bit and we will be able to have this discussion in an atmosphere that will allow people to know that there is nothing detrimental about devolution of power to any part of the country.

“We do not have to play politics with the issue. We must allow the National Assembly to do its job. Noise making is not the answer, there is a process to everything.

“We have sent what we have to the state houses of assembly to start working on and I am hoping that by the time we start engaging ourselves and getting everybody on board, we will be able to pass it.

Saraki said the national assembly would hopefully have a round table where experts would be invited to enlighten people on benefits of devolution of power and why it should be allowed to scale through.NAN