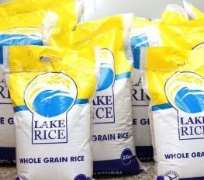 The Lagos State Government on Monday disclosed that it had acquired 32 metric tonnes per hour rice mill, which would help create no fewer than 200,000 jobs and ensure sustainable supply of wholesome rice to the state at an affordable price.

The state government, equally, disclosed that it had already partnered Ogun, Oyo, Osun, Ekiti and Ondo States to ensure that adequate rice paddy “is supplied to the 32 metric tonnes per hour rice mill and boost rice production in the country.”

This was contained in an address by the state governor, Mr. Akinwunmi Ambode, delivered at the 2017 World Food Day yesterday, revealing that 1,140 residents would benefit from various farming enterprises designed to boost their productive capacities in line with the state’s food security objective.

Ambode, who was represented by the Commissioner for Wealth Creation & Employment, Mr. Babatunde Durosinmi-Etti, said the rice mill would lead the creation of no fewer than 200,000 jobs in the state at the time full operation begins.

To guarantee the adequate supply of harvest rice to the rice mill, the governor noted that the state government had already partnered five South-west states – Ogun, Oyo, Osun, Ekiti and Ondo States in the area of rice production.

He briefly reflected on how the discovery of oil in the late 1960s triggered the neglect of agriculture, which he said, was the mainstay of the Nigerian economy, especially in the first republic.

Under the First Republic, the governor noted that food security was not an issue because the country was producing enough not only to feed its citizens and still export to other countries.

He explained that it had become imperative “to conserve foreign exchange by reviving the agricultural sector through policies and programmes that will encourage more people to go into farming and increase food production..”

He noted that the state government had provided basic facilities evenly distributed across the state, especially in rural communities despite the fact that most farming activities are based in the rural and semi-urban areas.

He said: “Our objective is to make our communities livable and centres of economic activities. This strategy, we believe, will reverse the trend of rural to urban migration and also make farming more attractive especially to young people.

Aside improving the quality of lives in rural areas where farming activities take place, he noted that the state government “is providing road infrastructure to facilitate the transportation of harvested produce to markets in the cities. This will address the issue of post-harvest wastage which will in turn translate to more income for farmers.”

Also speaking, the Commissioner for Agriculture, Mr. Oluwatoyin Surau explained the various farming enterprises that had been created to realise the state’s food security objectives and guarantee food sufficiency.

He said the Ambode administration “has made food security one of its cardinal programmes which serve as a tool to poverty alleviation and sustainable economic growth through agricultural development to underscore fiscal responsibility.”