North Korea would support total ban on nuclear arsenals in the world, including US' 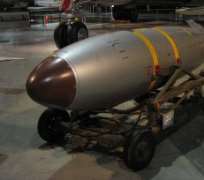 North Korea has expressed support to a complete ban on nuclear weapons in the world, but intends to keep its nuclear arsenal if the United States has one.

The DPRK constantly supports the complete elimination of the nuclearweapons and efforts for the denuclearization of the entire world.

But as long as US, who constantly threatens and blackmails North Korea keeps its nuclear weapons, DPRK rejects Nuclear ban treaty. The possession of nuclear weapons and intercontinental. ballistic missiles is a justified measure for self-defense, as no country in the world has been exposed to such an extreme and direct nuclear threat from the United States for such a long time, the diplomat said.

The situation on the Korean Peninsula has reached a critical point, a nuclear war can begin at any moment, he stressed.

According to Sputnik, North Korea has carried out nuclear tests in violation of UNSC resolutions.

In response, the UNSC introduced several ounds of sanctions against Pyongyang aimed at hampering the development of the North's nuclear weapons.

In late September, North Korean Foreign Minister Ri Yong Ho told reporters that US President Donald Trump had declared war on his country, and the nation had the right to take countermeasures against the United States, including bringing down US warplanes.

Trump has previously repeatedly hinted at the possibility of a military solution to the North Korean nuclear problem.