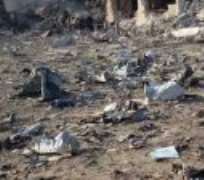 The bombing that hit the Somali capital, described by observers as “the strongest witnessed by Mogadishu in its history,” opened the door to many questions, especially in light of questioning the ability of the youth movement to implement, and promote the intelligence agencies belonging to a state or countries to stand and involvement in it.

The explosion, which is unusual in nature and size, is one of the most vital places near the Ministry of Foreign Affairs and the Qatari Embassy, without anyone claiming responsibility for it. This raises the question of who is behind it.

In the logic of «search for the beneficiary», observers believe that one of those beneficiaries of the bombing is the UAE, due to old differences renewed with the Somali government, which recently rejected the pressure on the province of Qatar, in addition to the dispute over the rule of the UAE Somaliland separated from the mother country .

Abu Dhabi is one of the main beneficiaries of the bombing

The Somali government has yet to announce the official final toll of the accident, but the latest medical report says more than 500 people have died, half of them dead.

Although the minister and the commander of the armed forces did not announce the reasons for their resignation, some media sources pointed out that the resignation due to differences in views in a number of security files, including the incident of the town of Berri in southern Somalia, where US forces killed more than 11 civilians , And then contradicted the statements of the commander of the armed forces, who said that the dead civilians, while the Minister of Defense they are terrorist elements of the youth movement.

The al-Shabaab movement, which usually claims responsibility for the bombings or attacks of the central government in Somalia, did not move a finger, and did not signal the adoption of the incident, unlike previous operations that were quick to declare responsibility.

Although the movement was expelled from the capital Mogadishu in August 2011 and lost much of the territory it previously controlled, it continues to launch regular attacks and bombings in Mogadishu and other towns against military and civilian targets as well as carry out attacks in neighboring Kenya.

However, these attacks are not such a capability, using hundreds of kilograms of explosives, at a location near the Somali Foreign Ministry and the Qatari Embassy in particular.

Excluding the youth movement, observers question who has the capability to carry out such a bombing of this magnitude, and who is the beneficiary? According to observers, one of the accusers is the UAE, due to its differences with Somalia, on several levels, including the crisis of the UAE military base in Somaliland, the Turkish military base recently inaugurated, Against Qatar.

Talk about the involvement of the UAE in supporting terrorism in Somalia, as evidenced by the semi-annual semi-annual report of the Panel of Experts of the UN Security Council sanctions committee on Somalia and Eritrea, which includes an arms embargo on both countries.

The report, which revealed details two weeks ago, included full paragraphs on violations by the UAE of international resolutions, whether by smuggling arms or forging official documents to overcome the ban on the export of coal from Somalia, which the Security Council considered to be the most important financial sources of the youth movement .

Observers confirmed the UAE’s involvement in promoting the division of Somalia and supporting the internationally recognized Somaliland, which declared its secession from the rest of Somalia in 1991 but which the international community does not recognize as an independent state.

Despite the declared position of the UAE on the unity of Somalia and its sponsorship of a reconciliation initiative between the parties to the Somali crisis, the parties signed the Dubai Reconciliation Pact after talks in London and Istanbul.

The UAE sought economic and strategic gains within Somaliland at the expense of the alleged unit through media, Emirati during the past two years, has never played on the unity side. Over the past two years, the UAE media have promoted the internationally recognized “Somaliland” country as a land of stability, culture and democracy.

It did not stop at that point, but the UAE is trying to establish a military base in the city of Berbera on the Gulf of Aden, located within «Somaliland». In February, however, the Somali government rejected the unilaterally-declared agreement between the United Arab Emirates and Somaliland on the establishment of the military base, accusing the UAE of “violating international law.”

Last year, an Emirati company signed an agreement with Somaliland for $ 442 million to develop the Berbera port for military use, after it was used mainly to export livestock to the Middle East.

The UAE, through Dubai World, has the right to manage the port of Berbera, the main port of Somaliland, with a 30-year contract. Later, during a visit by Somali President Mohammed Abdullah Faramago to Saudi Arabia, press reports revealed that the latter requested Saudi mediation to persuade the UAE to abandon the project to establish a military base.

With the Gulf crisis, last June, it was reported that Somalia had rejected a Gulf financial offer, which sources said was from the UAE, to sever relations with Qatar.

With the outbreak of the war in Yemen in the fall of 2014, some of the rich Gulf states, primarily Saudi Arabia and the UAE, sought for the first time in their history to build military bases outside their territory in the Horn of Africa, specifically in the states of Eritrea and Djibouti, Somalia, Yemen, and the Gulf of Aden, which is the gateway to the Bab al-Mandab strategic strait.

The UAE, which secretly orchestrates Turkey’s machinations, according to observers, wants the recent hustle in Somalia; Ankara is one of the biggest countries in support of Mogadishu.