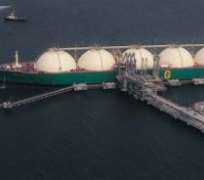 Nigeria LNG Limited has asked the Nigerian Maritime Administration and Safety Agency to pay it  the sum of $315,598,823.29 judgment debt as directed by the court.

The global firm has formally issued a demand notice to the Nigerian maritime agency.

The NLNG said in a statement that the sum represented the payments it made under protest to the agency since 2013, as well as direct and shipping losses it incurred due to the initial two-day blockade of the Bonny Channel by NIMASA in May 2013. It said the development followed the decision on October 3, 2017 by the Federal High Court, Lagos.

The Federal High Court in Lagos had ruled on October 3, 2017 that NLNG was not liable to make the said payments to NIMASA, and that all such payments already made by NLNG to NIMASA should be refunded forthwith.

The Honourable Court Presided over by Justice M. B. Idris further held that NIMASA was wrong in blockading the Bonny Channel for the purpose of enforcing the payments against NLNG.

Commenting on the development, General Manager External Relations of NLNG,  Dr Kudo Eresia-Eke said:'The Federal High Court ruling transcends being simply a legal victory for NLNG. It must be viewed for what it really is: A resounding message from Nigeria to the global investment community. The message is that we can be trusted to keep our sovereign word and that Nigeria remains open for business, partnership and investments.'

NIMASA had alleged that NLNG was liable to pay  three percent gross freight  levy on its international inbound and outbound cargo, Sea Protection Levy, two percent cabotage surcharge as well as other sundry claims, all of  which NLNG disputed.

NLNG, in 2013 filed the case at the Federal High Court against NIMASA, seeking a judicial determination on, among other things, the legality or otherwise of the levies sought to be imposed on NLNG by NIMASA, and the consequent blockade of the Bonny Channel by NIMASA and its agent as a result of the dispute.

NLNG had also sought a Court Order restraining NIMASA from further blockade of the Channel.   An Interim Injunction granted in favour of NLNG by the Federal High Court was disobeyed by NIMASA, which again blockaded the Bonny Channel over a three week period while the matter was pending, thereby preventing NLNG vessels and other vessels doing business with the Company from entry and exit through the Channel.