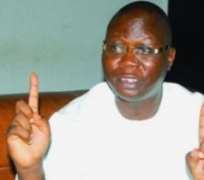 The the Alaafin of Oyo, Oba Lamidi Adeyemi, has selected the National Coordinator of the Oodua People's Congress, Otunba Gani Adams, as the new Aare Ona Kakanfo of Yorubaland.

The title was last held by the business mogul and winner of the annulled 1992 presidential election, Chief Moshood Kashimawo Olawale Abiola. Abiola died in dtention as part of series of events that preceded the annulment of the 1993 elction in which won by overwhelming majority.

Adams was notified of his selection via a letter sent to on on Sunday.

Though it has been claimed in recent times that the title has become more or less ceremonial.

Traditionally, the Kakanfo is meant to be the head of the Eso's (the Alaafin's special military force) and the head of the Yoruba army. The title in those days was reserved for the greatest Yoruba tactician.

According to a report by the Newsrangers, the history of Onakakanfo of Yorubaland stated that by virtue of his office as the commander of the Alaafin's army and that of the entire Yoruba nation, Kakanfos of old were required to go to war at least once in three years on the orders of the Alaafin, and the Kakanfo must return dead or alive within three months. In other words, he is to return home a victor or be brought home as a corpse.

It is on record that 19 years after Abiola's death, Yorubas are eagerly waiting for the manifestation of another Aare Ona Kakanfo.

Abiola was known to have held traditional titles from all the geo-political zones in the country and even beyond Nigeria. He achieved a rare feat of being the Basorun of Ibadanland and the Aare Ona Kakanfo of Yorubaland, holding the two titles simultaneously.

Not many have however thought about it that the beginning of the end was when Chief Moshood Abiola took the Aare Ona Kakanfo title.

Whether by coincidence or design, most of them were connected with turmoil that shook Yorubaland. Afonja L'aiya L'oko (the brave warrior with the spear) of Ilorin, Kurumi of Ijaye, Latoosa of Ibadan and Ladoke Akintola had their deaths connected to incidents involving change of government. Toyeje who could have been said to have had a good end suffered an ignominious treatment as Onikoyi, a provincial ruler created a parallel Aare Ona Kakanfo in person of Edun. As such, Toyeje had to cope with the existence of a rival Kakanfo and it was only in his time that Yorubaland had two Kakanfos.