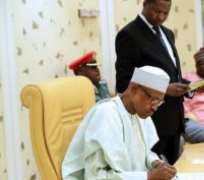 President Muhammadu Buhari is seeking  approval for another tranche of external loan to the tune of $5.5billion.

The Senate President, Bukola Saraki, read a letter from President Buhari in which he said the bonds would be channelled towards funding of the 2017 budget while the loan would be used in refinancing of maturing domestic debts.

The letter is titled “Request for the approval of external loan for: Implementation of the external borrowing approved in the 2017 Appropriation Act and External borrowing to re-finance maturing domestic debts through the issuance of USD3.00 billion Eurobond in the international capital market or through a loan syndication.”

It was however silent on the terms and conditions of the proposed external borrowing were not stated.

The letter reads, “The Senate may wish to know that in order to implement the external borrowings approved by National Assembly in the 2017 appropriation act, the FGN issued $300 million diaspora fund in the International Capital Market, ICM in June 2017.

“The balance of the 2017 external borrowing in the sum of $3.2 billion is planned to be partially sourced in the ICM of $2.5 billion through Eurobonds or a combination of Eurobonds and Diaspora bonds, while $700 billion is proposed to be raised from multilateral sources.

“It should be noted that intention is to issue the Eurobonds first with the objective of raising all the funds through Eurobonds and Diaspora bonds will only be issued when the full amount cannot be raised through Eurobonds.

“The Senate may wish to know that the proceeds of the proposed issuance of Eurobonds and and Diaspora bonds in the ICM will be used to finance the deficit of the 2017 appropriation act and provide funding for capital projects in the budget.

“The projects include the Mambilla hydro-power project, construction of the second runway of the Nnamdi Azikwe International Airport, counterpart funding of rail projects and construction of Bonny road with a bridge across Opobo channel.”

The President also seek the Senate's approval to borrow $3 billion from external sources to finance the 2017 budget.

“In order to reduce debt service levels, and letting tenure profile of debt stock, the FGN seeks to substitute maturing domestic debts with less expensive long term external debts. The FGN seeks to source $3 billion through issuance of Eurobonds to the ICM and or loan syndication by banks as approved by the Federal Executive Council.

“It is important to note that the proposed sourcing of $3billion from external sources to refinance maturing domestic debts will not lead to an increase in public debt profile because debt already exist, rather, the substitution of domestic debts with relatively cheaper and long term external debts will lead to a significant decrease in debt service cost. This will also achieve more stability in the debt stock while also creating more borrowing space in the domestic market for the private sector.

“The Senate will recall that in the 2017 appropriation act, debt service had 1.66 trillion representing 32.73% of the FGN's total expenditure which makes it important to urgent steps to reduce debt service cost,” the letter read.

The president noted that the terms of issuance of the bonds will be determined by the current condition of the International Capital Market.

The Minister of Finance, Kemi Adeosun, had last week told the Senate Joint Committee on Appropriation and Finance that the inability to access foreign loans was a major impediment to funding of capital projects in the 2017 budget.