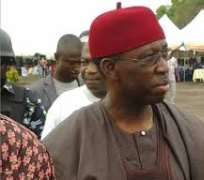 The consensus candidacy, an internal arrangement by the Peoples Democratic Party (PDP), to select those to represent the masses both at the local government and ward levels ahead of the January 6, 2018 council polls in Delta state, have taken a new twist as it has plugged the state governor, Mr Ifeanyi Okowa’s council, Ika North East into crises.

Otu-Okpu, Ika North East local government, councillorship aspirants engaged in free for all over issues of imposition, forcing elders and leaders of the party to scamper for safety.

This was against the backdrop of the mock primary elections that were conducted by elders and leaders of PDP, which were allegedly skewed to favour their anointed candidates.

While supporters of the party in Ndokwa East have rejected the imposition of one John Juan Governor, who was said to have been imposed on the people by a godfather in the council area, aspirants in Patani and Oshimili North council areas, have cried foul over what they described as "divisive and jamboree primary elections" that were carried out to delude the people.

The protest in Ndokwa East was said to have been triggered by a report from the Economic and Financial Crimes Commission (EFCC) that the 'anointed' candidate was undergoing investigation over his involvement in an alleged corrupt financial transactions while he was a Director on the board of the Nigerian Maritime Administration and Safety Agency (NIMASA) when Mr. Ziakede Patrick Akpbolokemi was the then Director-General.

Aggrieved aspirants in Ndokwa East have threatened to resist the imposition, maintaining that "since he (John Governor) was one of the Directors that were arrested and detained by the EFCC but was granted bail and still standing trial, while his accounts were frozen, he will not contest election in our area".

But the state chairman of the party, Kingsley Esiso, on Friday last week during a press briefing at the party’s secretariat said the party would not tolerate any form of imposition by any leader of the party, adding that any aspirant that was dissatisfied with the mock primaries in his council area should avail himself for screening after duly purchasing the nomination form for N1 million while N200, 000 has been pegged for that of councillorship.