China transfers 10b cubic metres of water from south to north 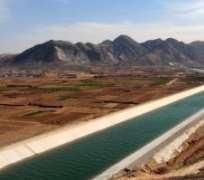 China said 53.1 million people in northern part of the country have benefited from its massive water transfer project, from the south to the north. The diversion started in 2014.

The diversion route which is 1,432 km long is mainly made of open-air canals, with over 10 billion cubic meters of water already taken from the south to the drought-prone north, authorities said, according to a report by Xinhua.

The water pumped from the Yangtze River goes to Beijing, Tianjin and the provinces of Henan and Hebei along the middle route of the water diversion project, according to the South-to-North Water Diversion Office under the State Council.

The middle route of the project carries water through canals and pipes from Danjiangkou reservoir in central China's Hubei Province. It came into operation in late 2014.

Currently about 70 percent of Beijing's water supply comes from the project, Xinhua reported.

The city's per capita water resources have increased from 100 to 150 cubic meters. Previously the city's water supply came mainly from underground water.

Officials with the office said as a result of the project, underground water levels have started to rise in some areas suffering from over exploitation in Beijing and Tianjin.

Officials with the office said the project has played “an indispensable strategic role” in helping the north ease water shortage, improve water quality and ecology, build a resource-conserving society and prevent natural disasters.

The middle route of the project carries water through canals and pipes from Danjiangkou reservoir in central China's Hubei Province to the cities of Beijing and Tianjin, and the provinces of Hebei and Henan.

The project has also helped improve the agricultural production and river and lake environments by supplying water to farmland and rivers.

China has built a green belt, stretching for 197 km and covering 636 hectares. along the canals and pipelines to help ensure water quality.

Henan has created shelter forests beside the canals, stretching over 580 km.

Beijing is still extending a 134 km green belt along the water diversion line that threads through Haidian district and the three suburban districts of Shunyi, Huairou and Miyun.

A green belts along a 60 km part of the canal in the south of the city will be finished in 2018.