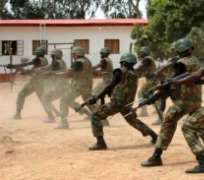 The Nigerian Army says it has deployed troops for the commencement of “Operation Crocodile Smile” in the six Niger Delta states.

Udoh said the operation was confidence building patrol rather than a show of force as widely reported.

“Operation Crocodile Smile is not a show of force but a confidence-building patrol that seeks to reassure the people of Rivers state and the Niger Delta that the army is ready to work.

“We are ready to work in close synergy and collaboration with other security services and agencies of government to ensure that there is peace and security for the people.

“Our operation aims to reassure the public that we are ready to fight crimes like cultism, militancy, and kidnapping so that people can go about their business without fear,” he said.

Others are Nigerian Security and Civil Defense Corps, Nigerian Customs Service and personnel of the Nigerian Prison Service.

He said the division would carry out the exercise in Akwa Ibom, Bayelsa, Delta and Rivers states while another formation would cover other states in the Niger Delta.

“Army, police and other security services was established to ensure peace; enforce law and order and create the enabling environment for economic activities to thrive.

“This is our ultimate mandate, and, as such, we urge Nigerians to give us the necessary support to enable us to succeed,” he said.

The three weeks exercise is slated for Oct. 7 to Oct. 28.