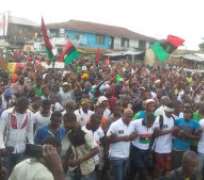 Apex Igbo socio- cultural organization, Ohanaeze Ndigbo, on Thursday said the restoration of Biafra was never an Igbo agenda. This disclosure came from the President General of Ohanaeze Ndigbo, Chief Nnia Nwodo. He said what Ndigbo had always wanted was restructuring of the polity to the benefit of the various segments of the country. He made this known in Umuahia at the inauguration of the state and local government executives of the Abia State chapter of the organization.

His  position is at variance with the Indigenous People of Biafra (IPOB) and Movement for the Actualization of Sovereign State of Biafra (MASSOB), which are campaigning for the restoration of Biafra through a referendum for self determination.

He said that the restoration of Biafra was a tall order given the constitutional roadblocks and would not be in the overall interest of the Igbo in their socio- economic and political relationships with other Nigerians.

“We should forget Biafra and insist on restructuring,” he said, adding that there is no Igbo that is happy with the situation of things in Nigeria but “we must seek for peaceful ways of resolving the issues.”

He advised that while the youths were justified in expressing their anger at the way Ndigbo was being marginalised in national affairs they should moderate their actions and words, adding that hate speeches would not resolve any problem.

He revealed further, that in their engagement with the leader of IPOB, Nnamdi Kanu, it was impressed on him that he and his members should tone down their words and desist from denigrating people and groups.

Nwodo also said that Kanu was told that his insistence on Biafra restoration and boycott of the November 18 election in Anambra State were not acceptable to Ndigbo hence he should abandon his “rigid position and join in the quest for restructuring.”

He justified the proscription of IPOB activities by the South East Governors Forum, explaining that what the state chief executives did was to stop IPOB from engaging in its public activities that leads to fatal clashes with security agencies.

According to him, without the action taken by the governors of the Southeast, the zone would still be engulfed in bloodshed, adding that he would not sit by and allow the youths of Igbo land to be cut down prematurely.

In his contribution, Abia State Governor, Okezie Ikpeazu, said that Nigeria and the world at large was passing through perilous times hence the need to seek for amicable ways to resolve issues. He advised Igbo youths to learn to respect leaders and listen to advice of elders instead of embarking on agitations to express their frustrations.

Ikpeazu said that henceforth youths and any Igbo person or group that has grievances should complain to Ohanaeze, which would take the matter up with the appropriate authorities.

Earlier in his address the Abia State President of Ohanaeze, Mr. Chimaobim Ajuzieogu, said the organisation would “no longer sit on the fence, neither shall we continue to observe as spectators in the affairs that affect us.”