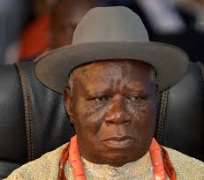 Dear Mr. President,
Firstly, I thank the Almighty God for your recovery from ill health, and safe return to the country. I pray God that as you recuperate, He will grant you speedy recovery. Buhari and Clark May I also use this medium to highly commend Mr. Vice President, Prof. Yemi Osinbajo, SAN, GCON, for competently holding the forte while you were away.

I pray that God will continue to grant both of you wisdom to pilot the affairs of this nation. I also wish to commend the role played by the Minister of State, Petroleum, Ibe Kachikwu, who accompanied Mr. Vice President in all the successful visits he undertook to the Niger Delta; and the Minister of Niger Delta Affairs, Usani Uguru Usani, for setting up Inter-Ministerial meetings organized by the Ministry of Niger Delta Affairs, where PANDEF also participated fully, in seeking for ways to develop the Niger Delta.

Your Excellency, Mr. President, I wish to, once again, draw your attention to the vexatious issues happening at the Nigerian National Petroleum Corporation, NNPC, its subsidiaries and the Department of Petroleum Resources, DPR. On Wednesday, 6th September, 2017, PANDEF put up a Paid Advert on the above issue, at pages 20 and 21 of the Vanguard Newspaper. After that, only last week, PANDEF equally held a Press Conference on the same issue, appealing to you to re-visit the provocative lopsided appointments and promotions in the NNPC and its subsidiaries, which were said to have been approved by you; and the stay put attitude of the Director of DPR, who ought to have proceeded on retirement since June, 2017, in the interest of peace, equity and justice.

For instance, of the 15 appointments of the most senior positions of the NNPC recently made, 10 are from the North, 3 from the South-West and 2 from the South-South. There is none from the South-East. We cannot continue to operate like this as a nation. Please find below the text of the Press Conference.

“I have been listening and reading commentaries and statements made by people since the issue of the redeployments and appointments of people into the NNPC subsidiaries, and my Press Conference and Newspaper publications. Most of these reactions by the NNPC and its apolologists, are stating that the claim that the redeployments/appointments are lopsided, favouring the North are untrue and that those behind the “… misinformation are mischief makers who want to further polarize Nigerians to achieve their political goals. What they deliberately did was to select few names and positions out of a long list and present them as whole. If you take time to go through the staff list of the Nigerian National Petroleum Corporation, you will see that every part of this country is adequately represented at all levels, be it management or down the ladder….” (Emphasis on 'adequately' mine.)

I have therefore, decided to reproduce here the full List that is made available to us. Here is the full list of the recently appointed/redeployed 30 Management staff of the Nigerian National Petroleum Corporation, NNPC, the Positions, names of those holding the positions and the Zones they come from:

The above list shows that the whole of the South has 19 positions out of the 55 positions and the North, a non-oil producing zone, has 36 positions, which include the very senior positions. We challenge the NNPC or whoever has a List that 'adequately' distributes these positions to all the zones, to make such List available to the public.

Top Management positions in other subsidiaries such as the Petroleum Product Marketing Company, PPMC, Petroleum Trust Development Fund, PTDF, Petroleum Equalisation Fund, and the Department of Petroleum Resources, one of the Departments in the Ministry of Petroleum, are also majorly held by Northerners.

We, are, however glad to observe that some well meaning Northerners have also made open comments about this injustice, noting that what the Presidency has done is not fair and just. One of such persons is Prof. Abubakar Suleiman, former Minister of National Planning who has observed that “the Nigerian National Petroleum Corporation is a parastatal within the Ministry of Petroleum and as you know, oil has for a long time remained the mainstay of Nigeria's economy.

This is something we draw from the South-South and South-Eastern part of Nigeria and for you to make managerial appointments without involving those who own this resource, I think it is greatly unfair. I think their outcry is justified. This attitude of the government of the day to want to marginalize certain parts of the country, especially the oil rich areas, is something that is worrisome…. We are talking about restoring peace in the Niger Delta.

At a time when we are trying to restore normalcy and pacify militants in the Niger Delta, you are also trying to show them that they are nobody. I think this is unfair to the South-East and the South-South. I am from the North; we have yet to begin oil production, it is only fair to give oil producing areas a fair share of their God-given resources in terms of appointments, revenue sharing, infrastructural development as well as ensuring that their voices are heard in national discourse…”

We in the Niger Delta Region stand by our earlier position that the recent appointments/redeployments made in respect of the NNPC Board and its subsidiaries by Mr. President, is very much lopsided to the Northern part of the country. If the NNPC and some others are making counter claims, they should also make public the 'correct' List. Otherwise, we in the South-South (Niger Delta) standby our earlier position that the appointments/redeployments be reversed and an equitable one made in the spirit of fairness, equity and justice.

It will be recalled that the people of the Niger Delta/South-South are still contending with the vexed issue of the composition of the Board of the NNPC, where out of the 9 members of the Board only one person is from the South-South in the person of Dr. Thomas M. A. John, apart from the Minister of State, Petroleum, who is delegated by the Minister, and one person from the South-West.

The rest members including the Chief of Staff to the President are all from the North. The South-East, an oil producing zone, does not have a representation in that Board. Below is the list of the members of the Board: Dr. Emmanuel Ibe Kachikwu, Honourable Minister of State Petroleum-Chairman Dr. Maikanti Kacalla Baru, Group Managing Director—North The Permanen Secretary of the Federal Ministry of Finance Mallam Abba Kyari—North

7.Mallam Yusuf Lawal— North
Dr. Pius O. Akinyelure—South-West
Dr. Thomas M. A. John—South-South
The Department of Petroleum Resources, DPR The Director of DPR, one of the Departments in the Ministry of Petroleum, Mr. Mordecai Danteni Baba Ladan, attained the retirement age of 60 years in June, 2017, but has refused to go because he claims he has four-year contract.

Mr. Ladan joined the DPR on 23rd November, 1987 and was appointed the Director to take over from Mr. Osahon in 2015. The Law states that retirement is based on two factors; attainment of 35 years in service or attainment of 60 years of age, this second factor accounts for why Mr. Ladan should have left since June, 2017, but No! he is still there.

As a matter of fact, he has been automatically locked out of the pay roll, which is an automatic thing that happens once a person turns the statutory retirement period. Mr. Ladan is insisting that he has a 4 year contract. The question is someone work as a regular staff and at the same time work as contract staff in the same organization and at the same time? Unfortunately, the Head of Corporate Services, who ought to issue the Letter of Retirement to Mr. Ladan, has refused to do so because he too is a Northerner, from Niger State.

Below are the positions at the DPR: Director – Mr. Mordecai Ladan—North

The break down shows that six of them are from the North,

Is this fair to a people who bear the brunt of oil exploration? There is no zone in this country that does not have qualified manpower, within or outside the NNPC and its subsidiaries, to occupy the offices. I have nothing against the North. I have a son who is a Muslim and whose mother is from Mubi in Adamawa State. I have lots of friends, acquaintances and associates from the North. I respect them as a people. But the RIGHT thing must be done: Equity, Fair play, Justice and Equality.

If Oil were to be Groundnut, will the South-South be allowed to dominate? The reckless impunity in this country has to stop! The notification of these recruitments/appointments which was signed by Isa M. Inuwa, COO, Corporate Services, NNPC, stated that “The President and Commander-in-Chief of the Armed Forces has approved the appointments/redeployments of the under-listed Management staff.”

We, therefore, once again call on Mr. President, who gave the approval, to in the interest of fairness, equity and justice, to revisit these appointments, giving every zone a sense of belonging; especially those who bear the brunt of oil exploration.