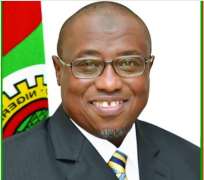 A pro-transparency and non-governmental organization-HUMAN RIGHTS WRITERS ASSOCIATION OF NIGERIA (HURIWA) has demanded the suspension from office and the immediate investigation of the Group Managing Director of Nigerian National Petroleum Corporation Alhaji Maikantii Baru.

The Rights group hinged its call on the emerging monumental allegations of misapplication of humongous amount of $26 Billion as made by the minister of state for petroleum, Mr. Kachukwu in a letter to President Muhammadu Buhari.

The Rights group has also tasked president Buhari to act without undue delay on the report of the VP. Professor Yemi Osinbanjo led presidential probe panel on the scam involving the suspended secretary to the government of the federation Mr. Babachir Lawal, and the discovery of over ($35 billion) huge foreign denominated currencies involving the suspended Director General of the National Intelligence Agency.

Also, the president must be urged to act decisively in the swirling allegations of fraud running in to billions and official sexual misconducts leveled against serving Inspector General of Police Alh. Ibrahim Kpotum Idriss by senator Isa Hamman Misau, of the All Progressives Congress representing Bauchi Central in the National Assembly.

Reminding president Buhari of his constitutional oath of office in which he is obliged to do right to all manner of people, according to law, without fear or favour, affection or ill-will, the Rights group said Nigerians desire an Administration that will consistently wage the anti-graft war in line with the rule of law and not the consistent application of double standards whereby members of the political opposition are witch- hunted, demonized and persecuted but accused persons belonging to the ruling party are spared using subterfuge and 'government magic' of bureaucratic delay tactics of setting up of endless committees sidestepping legally established anti-Graft institutions.

Citing section 15 (5) of the Constitution which states that ‘the state shall abolish all corrupt practices and abuse of power,” HURIWA affirmed that the wide- ranging allegations of breach of transparency rules made against the NNPC boss by no other person but the minister in charge of the petroleum sector, must never be swept under the carpet.

The Rights group also expressed consternation that the Senate has dabbled into the matter rather than forward the petition by the minister of state for petroleum to the relevant law enforcement agencies for necessary investigative actions and prosecution.

"The decision of the Senate to wade into these extensively damaging claims of CORRUPTION and abuse of office levelled against the NNPC GMD by the cabinet level minister is ill-advised as that may occasion political softlanding and eventual settlement. The EFCC/ICPC and Code of Conduct Institutions must be involved".

“It is sad that Nigeria has now reached the phase and time whereby most Nigerians believe that it was risky for an Igbo speaking public office holder to expose perceived cases of fraud against a Northern Moslem simply because the president being a Moslem will sack the non-Moslem who has made the allegations against another Moslem public office holder. The social media is replete with opinions as stated above and this is pathetically regrettable”.

“We urge president Buhari to listen to the voice of reason and not buy into the illogicality of dismissing criticisms as the seeking of government's invitations for settlement as made by his media assistant Alhaji Garba Shehu. Mr. President should in the spirit of patriotism, immediately excuse the GMD of NNPC and to recommend his matter to the Economic and Financial Crimes Commission and the Independent Corrupt Practices and Other Related Offence Commission”.

HURIWA warned against the emerging trend whereby the body language of the president seems to have sympathized with his aides and officials who are allegedly in conflict with the anti-graft laws.

HURIWA recalled that in a letter to president Buhari by his petroleum Minister, the NNPC boss was accused variously of insubordination and breach of due process laws in the awards of contracts.

HURIWA recalled that in a letter dated August 30th, 2017, HMS/MPR/001/VOL.1/100, the minister accused the GMD of running a one man show at the corporation.

“Mr. President in over one year of Dr. Baru’s tenure, no contract has been run through the NNPC board”.

“The legal and procedural requirement is that all contracts above $20m would need to be reviewed and approved by the board of NNPC.”

HURIWA recalled that excerpts from the letter are as follows: “This is despite my diplomatic encouragement to Dr. Baru to do so to avoid wrongfully painting you as a President who does not allow due process to thrive in NNPC”. “Given the history of malpractices and the public perception of NNPC as having a history of non-transparency, the NNPC tenders board, NTB, cannot be the final clearance authority for contracts it enters into”.

“The following major contracts were never reviewed by or discussed with me or the NNPC board”.

Kachikwu, alleged that the GMD has ran the corporation like a one man show”. I learn of transactions only through publications in the media”.

“There are many more your Excellency. In most of these activities the explanation of the GMD is that you are the minister of Petroleum and your approvals were obtained”.

“When I call for meetings, the GMD Baru chooses which meetings he wishes to attend and those he chooses to send subordinates, he sends those subordinates without courtesy of a call to explain his absence”.

“At inception I instituted a monthly Parastals review meeting with Head of Agencies and another with the oil senior management in all parastatals, the GMD objected to his senior staff coming to the joint senior management meetings”.

“He argued that this was overreaching his territory, I have tried to manage the bad perception created by GMD’s blatant insubordination and disrespectful attitude, I have worked hard to avoid being seen as petty and meddlesome.

“In order to convince your Excellency to sideline me, I am sure I have been labeled as being, anti-north, corrupt and in collusion with militants”.