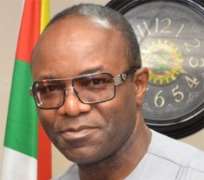 The Minister of State for Petroleum Resources, Dr. Ibe Kachikwu, has written a petition to President Muhammadu Buhari, alleging acts of insubordination and humiliation by the Group Managing Director of the Nigerian National Petroleum Corporation, Dr. Maikanti Baru.

In the letter, titled 'Re: Matters of insubordination and lack of adherence to due process by the GMD NNPC – Dr. Baru,' written on August 30, 2017, with reference number HMS/MPR/001/VOL.1/100, Kachikwu alleged that the NNPC boss had repeatedly sidelined and disrespected the board of the national oil firm, which is chaired by the minister of state.

After felicitating with the President, the minister outlined the various alleged misdemeanours of the NNPC boss, urging Buhari to intervene by calling on Baru to respect due process.

In August 2015, Buhari appointed Kachikwu as the NNPC GMD, but replaced him with Baru in July 2016 and made the minister the chairman of the corporation's board.

In the letter, which was sighted by our correspondent in Abuja on Tuesday, Kachikwu said, “Mr. President, yesterday (August 29, 2017) like many other Nigerians, l resumed work and confronted with many publications of massive changes within the NNPC.

“Like the previous reorganisations and 'repostings' done since Dr. Baru resumed as GMD, I was never given the opportunity before the announcements to discuss these appointments. This is so despite being the Minister of State, Petroleum, and Chairman, NNPC Board.

“The board of NNPC, which you appointed and which has met every month since its inauguration, and which, by the NNPC, is meant to review these planned appointments and postings, was never briefed. Members of the board learnt of these appointments from the pages of social media and the press release of NNPC.”

The minister told Buhari that it was in the spirit of service and absolute belief in the President's leadership and integrity that he (Kachikwu), after one year of tolerating the disrespectful and humiliating conduct by Baru, decided to bring the GMD's acts to the President.

Kachikwu said he had been on a race to stabilise and move the industry to the next phase, adding that parastatals in the ministry and all CEOs at these parastatals must be aligned with the policy drive at the supervising ministry to allow the sector register the growth that had eluded it for many years.

The minister stated that in anticipation of vacancies that would arise from retiring senior executives of the NNPC, he wrote to the GMD a letter requesting that they both have prior review of the proposed appointments.

“Not only did he (Baru) not give my letter the courtesy of a reply, he proceeded to announce the appointments without consultation on board concurrence.

“Mr. President, please note that there is a board service committee, whose function is to review potential appointments and termination of senior staff prior to implementation. This committee was also not consulted,” Kachikwu said in his letter.

He said the open administration, which he introduced, had been completely eroded, as NNPC staff members were afraid of contacting the minister for fear of being punished, sidelined in appointments and targeted.

“The effect of the attitude of the GMD and the sidelining of the board is that there is a fear culture in the NNPC,” Kachikwu stressed.

Listing his prayers, the minister noted that “we save NNPC and the oil industry from collapse arising from the above non-transparent practices and empower the board you inaugurated to do the needful.”

He added, “That you save the office of the minister of state from further humiliation and disrespect by compelling all parastatals to submit to oversight regulatory mandate and proper supervision which I am supposed to manage on your behalf.

“You kindly instruct the GMD to effectively leave the NNPC to run as a proper institution and report out along due process lines to the board and that Your Excellency instruct that all reviews be done with the minister of state prior to your decision.

“That to set right examples, you approve that the recently announced reorganisation changes be suspended until the GMD, myself and the board have made relevant input to same. This will send a clear signal of due process and transparency.

“That Your Excellency encourage joint presentation meeting between head of parastatals and the minister of state to you as to encourage a culture of working together and implant discipline in the hierarchy.”

Kachikwu said against the rules, some major contracts were never reviewed or discussed with him or the board of NNPC.

“The legal and procedural requirement is that all contracts above $20m would need to be reviewed and approved by the board of NNPC. Mr. President, in over one year of Mr Baru's tenure, no contract has been run through the board.

''As in many cases of things that happen in NNPC these days, I learn of  transactions only through publications in the media,'' Kachikwu wrote.

The NNPC's Group General Manager, Group Public Affairs Division, Ndu Ughamadu, told one of our correspondents on Tuesday that he had not seen the minister's letter to Buhari, adding that he would not comment on what he had yet to see.

“However, the important thing, with respect to your enquiry, is that I have not sighted the letter.”

It's normal correspondence between minister, President

In response to enquiries by The PUNCH, the Federal Ministry of Petroleum Resources on Tuesday evening, through an email from its spokesperson, Idang Alibi, confirmed the minister's letter, but regretted that the confidential memo between Kachikwu and the President was publicised.

It said, “The attention of the Ministry of Petroleum Resources has been drawn to a publication on a memo emanating from the HMSPR to the President.

“Please, note that the communication under reference is a normal procedural correspondence by the minister to the President relating to developments in parastatals under his supervision.

“It is most distressing to the ministry of petroleum resources that a confidential communication to the President on the performance of one of its parastatals can be made public.

“The focus of the communication was on improving efficiency and deepening transparency in the oil and gas sector for continued investor confidence.

“It is noteworthy that the President has been fully supportive of the efforts of the ministry to entrench good governance and accountability in the oil and gas sector.”

Sources at the corporation and the ministry confirmed to one of our correspondents that all had not been smooth between Kachikwu and Baru, stressing that this must have warranted the petition against the GMD by the minister.

Meanwhile, the Special Adviser to the President on Media and Publicity, Mr. Femi Adesina, on Tuesday, said he would not comment on the minister's letter to Buhari.

“I have no comment,” Adesina simply said when one of our correspondents asked him what action the President had taken or would take on the matter.

When also asked if Buhari had received the letter, the presidential spokesman insisted he would not comment on the matter. PUNCH