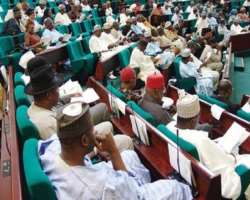 ABUJA, June 02, (THEWILL) - Senate on Wednesday cleared Mr. Samuel Ukura as Auditor General of the Federation (AGF) amidst protests from some lawmakers.

Senators especially those from the South West insisted that the Presidency and the Federal Civil Service Commission (FCSC) did not follow due process in the recommendation and appointment of the new Auditor General.

First to oppose the appointment was Senator Sola Akinyede, (PDP Ekiti), who prayed the Senate to drop the nomination on the ground that (FCSC) employed unconstitutional procedures in the exercise by applying criteria which disqualified two senior directors in the office of the AGF from applying for the position.

Akinyede was supported by Senators Ishiaka Adeleke, (PDP Osun), Ayo Arise, (PDP Ekiti) and Festus Olabode, (AC Ekiti), who insisted that the process adopted for Ukura’s recommendation was in violation of laid down procedures and should be reviewed.

However, supporting the appointment, Deputy Leader of the Senate, Victor Ndoma Egba, (PDP Cross River), insisted that the Commission and the Presidency acted in line with the provisions of the 1999 Constitution and urged the Senate to go ahead with the clearance.

Also speaking, Senators Umaru Dahiru, (PDP Sokoto) and Omar Hambagda said the Constitution vests the powers of the appointment of the AGF on the President and urged the Senate not to meddle with the duties of the Executive.

However, majority of the senators at plenary Wednesday supported Ukura, resulting in his confirmation by the Senate.