Nine lessons for Nigeria from the German Unification 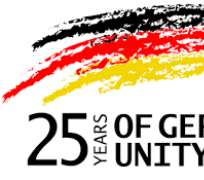 Today in Germany, the Germans are celebrating similar to what Nigerians ‘celebrated’ two days ago, on October 1. Thus, permit me to open this article by congratulating Europe’s best economy for taking the right steps in 1989, step that the political elite of my country, Nigeria, particularly northern and southern leaders, should consider also taking as we approach the feverish year of 2019. Happy anniversary Germany!

Nigeria’s celebration is called Independence Day, a day to commemorate the event of being politically free from the direct control of colonial Britain, as it were. That of the Germans, on October 3, is called Unification Day - a day when a united Germany was reborn and the Aryan nation finally overcame its decades of hurtful division between its former East and West breakaway sides. Take note that they were once one, something happened they broke away and tasted what it is to be broken and after over forty years of a sordid separation, in 1989, they retraced their steps and the rest is history.

Germany's unification was such an arduous process. It took decades of war, major technological shifts and extraordinary leadership for the various German mini-states to unify. Ultimately, they came together for one reason: survival. Now Nigeria must learn this first and foremost lesson from the German Unification and from Germany. We must measure the risks and rewards associated with integration, not secession, for the sake of our survival in a highly competitive world.

However unity must not be decreed but must be the product of consensus and compromise – recognizing not denying difference. We may discuss that in detail later, or in another article.

Today, Germany is plus one in the Unification calendar and I congratulate Deutschland despite her curious refusal of my visa application recently. I congratulate Germany for taking the hard, even painful, but right steps in 1989 and, braving all odds. But why should Germany and her Unification interest Nigeria or Nigerians? Nigeria and Germany share a lot in common which, sadly, Nigerians and Nigeria often either overlook or underplay for curious reasons. Four broad reasons.

Nigeria has 36 federating units called States, Germany has 16 federating units called Bundeslands. For issues that bother on foreign policy, defence, monetary policy, and general short list federal issues, Angela Markel the Chancellor (Prime Minister) shows strength. For all other non-exclusive issues – and they are the long list – the political heads of the Bundeslands states and the Stadts (cities) take full charge. Angela Markel’s right to interfere in policies of even a Stadt is greatly limited by the constitution which regulates everyone. Angela Markel will never move the German military into Bavaria or Leipzig without the express consent of the people of the area – consent freely given not one forcefully accepted because of pythons and crocodile infestations. This is the second lesson Nigeria must learn from Germany – mutual respect for tiers and organs of government, by implications, respect for the rule of law.

Hold it! I know you will be quick to correct me. Yes it is true that Nigeria has had only one officially recognized civil war and that was in 1967-1970 when the eastern region seceded and the rest of Nigeria forcefully brought them back. But there is – not was - a second civil war raging in Nigeria since 1970. Some people term it “The National Question” war, but permit this writer to call it “The Structural War” – a cold and hot war. It is manifested in coups and counter coups since 1967.

This war was the mother of Niger Delta militants and the father of Boko Haram. IPOB is its youngest baby. It is a war which battlefields are uncertain. It is a war of national identity which has given rise to inter and intra regional mutual suspicion – and even agitations for secession or its euphemism, restructuring - among the regions and geopolitical spaces of the oil rich but policy poor country. Any country which classify her citizens as indigenes and residents or whatever other contraption, is definitely at war with itself.

This is the third lesson we must learn from Germany by their Unification. They ended that war by simply ending discrimination, declaring every German free to live and be native of wherever they stay without discriminatory limitation whatsoever.

This may come as a surprise to many who hitherto imagined that Germany had or has only one language. Perhaps not many Nigerians know or remember that Germany’s sixteen federating states were originally not homogenous as they appear to be today – they were once upon a not too distant time ago completely different people physiologically, linguistically and even religion. Just like Nigeria. The difference is that at certain points in their history, leader after leader, like builders laying bricks upon bricks, united the country by adopting a common language – Deutsch - and forging an identity by it. This is one vital and fourth lesson we need to learn from Germany. We should allow each of the six geopolitical zones of the country adopt a second language to English and let there be two languages in each zones but all of us should speak English. Again, this should be by consensus – not fiat.

Whereas Nigeria is the most populous black nation in Africa and on earth, Germany is about the most populous member of the European Union. With large population, a country will either be poor or rich depending on what it does with its resources. Despite Germany’s large population and its significant unemployment ratio too, the country continues to make significant effort to take more of her people out of poverty into at least the middle class. In Nigeria, the middle class is stifled and socioeconomically emasculated by government ill thought-out policies. It is either a person is very rich or very poor in Nigeria and indeed most African countries. This is a recipe for disaster. Nigeria should harness her advantage in population, develop her youths and above all - establish a social code. Our capitalism (mindless or mindful) model has failed. Let us look to German, a social-market economy which is a country in many ways like ours – once in ruins and having to forge a Marshal Plan for recovery. We need a similar Marshal Plan and that plan must be social-market oriented, not this conscienceless capitalist exploitation of the poor in the guise of unregulated free market and no social protection or promotion. This is the fifth lesson from Germany.

How did the Germans overcome this problem of unemployment? Four broad strategies. First, they established a social code that binds all governments, whether progressive, 'retrogressive', conservative or 'conversative' – it doesn’t matter the matter, all government in Nigeria must enforce the social code and that means that no one in Germany shall be unable to meet basic requirements of life; food, shelter and clothing. Interestingly, in Nigeria, we have that in the constitution in Section 16-18, but the framers of the constitution broke the leg of the provision by saying government should enforce the social code “as and when practicable”. This is a call on the National Assembly to treat that broken bone in the constitution and make our governments to become hard working, not resting on “It is a non-justiciable clause” excuse.

In addition to the social code, the German invests heavily in education of her youths because they realize that an educated youth is the greatest asset to a nation’s work force. For those who are not gifted in academics, the Ausbildung (Apprenticeship) programme is set up. Nigeria can copy and paste this Ausbildung model from Germany and watch how the nation will transform within a decade. The Igbos of Nigeria are to be commended in this regard. The secret of their success in commerce and industry is simply their “Learn Work” programme, which is a local version of the German Ausbildung programme.

In addition to the five lessons above, Nigeria needs to learn a sixth lesson of the strong carry the burden of the weak considerably – not abandoning them to their fate. The cacophonic calls across Nigeria for separation using all the adjectives are largely motivated by selfishness. Those who consider themselves rich want to take their wealth elsewhere and leave those without wealth to suffer. This would have been perfectly okay if we are referring to wealth earned not rental wealth.

In its current form, the Nigeria is inherently unstable and unsustainable. However, many people still believe this nation can and should be unified; for some of us, unification is a path out of the current crisis. And I believe we are right to think so. In theory, a genuinely federal Nigeria would be more stable and more prosperous than the current hybridized uncertain system.

Though unity is not, at this moment of national confusion heightened by a president whose public utterances hurt rather than heal, a convenient desire, Germany’s unification is perhaps the best example in modern history of the benefits of integration over separation.

More often than not, new political systems are rooted in the ashes of war and conflicts. Germany was an example. Theirs is a legacy of birth marked by conflict so severe that it destroyed the old system and gave way to unorthodox solutions previously unthinkable. Nigeria needs to think like this – unorthodox solutions. Stop looking to IMF, World Bank and your other economic competitors for advice. Germany rose from the trauma of World War I and World War II. This 30-year period brought what was then one of the most powerful nations in the history of the world to its knees, leaving behind a ruined, exhausted, shamed and divided country. But between 1945 – 1989 Germans started to ask soul-searching questions and talking to themselves about their future – they knew they needed to drive out all their competitors pretending to be their protectors and that meant they must first come together as one, which they did in 1989. Like Germany, Nigeria needs to call a solemn assembly of your people everywhere they are scattered abroad and among yourselves, develop an unorthodox formula. This is the seventh lesson from the German Unification.

The eight lesson to learn from German Unification is her foreign policy. Although Germany is the manufacturer of most of the deadliest weapons of war, her focus is not in overreaching herself – stressing her military forces – trying to play Big Brother Europe. Simply put, Germany is reluctant to be Europe’s leader although he is naturally the leader. Germany's reluctance to be Europe's leader highlights the original design of a united post-war Germany which was trade, not conquest. While it is plausible to be the Big Brother of Africa, Nigeria should rework their foreign policy to promote trade first and foremost – even in wars or intervention.

This is where my nine lessons from the Germany Unification ends but before that, let me present the ninth lesson in a single memorable two-word sentence – “Nigeria, Think!”.

It is increasingly unlikely that a true fiscal federalism or even sustainable peace and security can be achieved in Nigeria by sustaining the existing legal, social and geopolitical structures. This is the best time to restructure Nigeria to prevent the kind of shame that the hitherto headstrong and uncompromising Prime Minister of Spain is suffering since Sunday’s YES referendum vote to exit Spain by the Catalonians.

Many people hoped that Germany's Unification will usher in a sustaining period of prosperity for Germany. They were not disappointed. Germany has been growing like a Liger since the Unification and if Nigeria would be humble enough to learn from a prosperous, stable and secure nation that has lots in common, then our salvation is in sight.