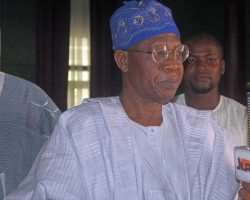 The Minister of Information and Culture, Alhaji Lai Mohammed, on Sunday inaugurated a new PayTV platform, TSTV, which has brought excitement to television viewing tribe in Nigeria.

The Minister, while unveiling the outfit  in Abuja  on Sunday  night when he unveiled TSTV said that will enjoy a pioneer status with a three-year tax relief.

“Dr. (Bright) Echefu (TSTV Managing Director), you have come at a very good time because this government only recently granted a pioneer status to the Creative Industry and what this means is that you will be entitled to a three-year tax relief and all your investors will not pay any tax dividends,” he said.

Alhaji Mohammed said the unveiling of TSTV has totally redefined the PayTV platform and, by extension, the TV industry, through the provision of access to people in all segments of society to enjoy high quality entertainment.

“What Dr. Echefu has done is to democratize the media and entertainment industry and make it possible for all to have access to the best entertainment in the world. Just like a Nigerian also made history by crashing the cost of telephony in Nigeria, I am glad that another Nigerian is now coming forward also to crash the price of PayTV,” he said.

The Minister said the advent of Digital Switch Over in broadcasting in Nigeria has created a paradigm shift in the television industry, where compelling contents will now attract viewership.

He identified lack of objective audience measurement mechanism as a key factor against investment in content production, but disclosed that his ministry is planning a workshop to address the challenge.

Alhaji Mohammed said the Creative Industry played a critical role, along with other non-oil sector players, in pulling Nigeria’s economy out of recession, and that the government plans to develop the industry to contribute 5% to the GDP, as against its current contribution of 1.36% by 2020.

Minister of Information and Culture, Alhaji Lai Mohammed (right), and the Managing Director/CEO, TSTV, Dr. Bright Echefu (left), at the unveiling of the PayTV platform in Abuja  on Sunday

He commended Dr. Echefu for his courage of conviction and belief in Nigeria and pledged the readiness of the Federal Government to continue to create the conducive environment for private sector investments to thrive.

Meanwhile, the launch of a new satellite television, has been welcomed by many Nigerians who took to their social media platforms to celebrate the new provider.

While celebrating the new provider, they mocked DSTV and other cable service providers saying that TSTV has brought very good competition that would put them on their toes.

Many of the Nigerians who alleged exploitation by existing satellite TV providers said that TSTV has affordable rates and better offers.

TSTV among other things, promises to offer pay-per-view, affordable subscription rates with daily subscription available as well as a 20gb free data all for a N5,000 decoder and maximum monthly subscription of N3,000.

Long before it was launched on Oct. 1, many Nigerians had treated the news of its coming with much anticipation. Many believe the coming of TSTV will break the control of DSTV.

On twitter, TSTV trended with over 26,000 mentions as at the time of this report.

Some of the Nigerians who expressed their views on their Twitter handle said that the launch of TSTV which coincided with the nation's independence day celebration, meant satellite TV independence for Nigerians.