Why Is Uhuru Kenyatta Using  violence  on His Opponents To Win The Re-run Of Presidential Election? 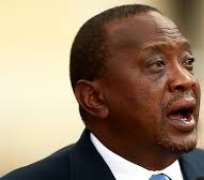 At mid-day of this day of Thursday 28th September 2017, the city-center of Nairobi is a no- go-zone, it is under the curfew , the police are brutally engaged in bloody violence with the University students , from the university of Nairobi and the Technical University of Kenya. This is part of the violence that Uhuru Kenyatta is using by applying the state machinery like the police and the paramilitary to brutalize Raila Odinga and his supporters, Odinga is opponent in the re-run for presidential election.Most of the politicians from the opposition or Odinga, side like the MP for Embakasi Mr. Babu Owino , are now arrested and detained in police cells for no legal reason other than weakening the campaign operations of the opposition, Uhuru Kenyatta is also using Members of parliament from his camp to change the election law which will make transmission of presidential election results to be transmitted not digitally as usual but manually from the polling stations all over the country to the tallying center in Nairobi.The main intention of this law is to create the leeway for mauling and destroying the ballots papers in support of Raila Odinga come the re-run. In fact Kenyatta is now taking the country back to the dark days when Kenya was under the tyrannical dictatorship of Daniel Moi.

Uhuru Kenyatta had initially faked the results to be declared the President on 8th August 2017 through algorithmic manipulation of the computer servers used by the electoral body in Kenya, only for these results to be annulled by the supreme court, which is also ordered for a re-run between two presidential candidates , Kenyatta and Odinga. Now Kenyatta is taking advantage of his incumbency to use violence and other Machiavellian tactics to retain power.

Uhuru Kenyatta comes from the Kikuyu community that have ruled Kenya for the past forty years, during this reign, there has been rampart economic crimes like looting of the state property through mega-corruption especially evinced in the recent euro bond scandal and NYS scandal, all these economic crimes have only benefited the members of the Kikuyu Community as the rest of Kenyan people wallow in poverty and despair.Analysts comment that it is due to fear among the Kikuyu billionaires that the past economic crimes will be uncovered in case a leader from another community other than the Kikuyu is elected the president, this is the collective political irrationality which is making the Kikuyu power shenanigans to use criminal means to retaining power at whatsoever cost in the presidency of Kenyatta .