COURT QUASHES WARRANT OF ARREST AGAINST KALU, SAYS IT'S UNCONSTITUTIONAL, NULL AND VOID 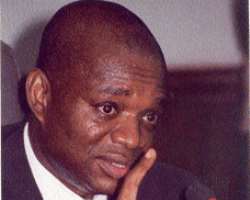 Dr. Orji Uzor Kalu
An Abuja High Court has set aside the purported warrant of arrest issued against former governor of Abia State, Dr. Orji Uzor Kalu, by the Imo State House of Assembly, describing it as unconstitutional, null and void and of no effect.

Justice Danlami Senchi in his judgment on Wednesday, condemned the action which, he held, was an infringement on the fundamental rights of the Chairman of the Board of Trustees of the Progressive Peoples Alliance [PPA] to fair hearing, personal liberty, freedom of movement and expression.

Although he agreed that the State House of Assembly has powers under Section 128 and 129 of the 1999 Constitution to issue a warrant of arrest on any Nigerian citizen, such powers were subject to the provisions of the fundamental rights provided for under chapter four of the legal document.

According to the court, 'the powers of the legislature to investigate cannot be exercised to infringe on the rights of Kalu. It appears to me that in the exercise of such powers, it should be carried out, subject to the constitution without infringing on the rights of a person as provided under chapter four, sections 35 and 36 of the 1999 constitution.

'More so, the issuance of the warrant of arrest on the applicant without proper service carried out on him is tantamount to an infringement on his fundamental rights to fair hearing. Accordingly, it is unconstitutional, null and void and of no effect whatsoever.

'The power of the House of Assembly to issue a warrant of arrest on any person does not intend to infringe on the rights of the people. In the instant case, the actions of the Imo House of Assembly transcends to trample on the rights of the applicant. The so-called warrant of arrest was to intimidate, harass an innocent citizen.

'If the Governor of Imo State, Chief Ikedi  Ohakim felt aggrieved by the actions of the applicant, there are other legal ways of seeking redress. He cannot hide under the canopy of the State Assembly to molest, hunt and harass the applicant. This approach is blatantly uncivilized, barbaric and not fashionable in this 21st century.'

Before the judgment, the court assumed territorial jurisdiction to entertain the case contrary to the contention of the respondent's counsel, M.C. Uwasomba, Director of Litigation, Imo State judiciary, that the matter should be heard in Imo State. Senchi is his ruling on the preliminary objection raised in the suit by the respondents said although the warrant was issued in Imo State, it was to be executed in Abuja where the applicant was residing.

Conceeding that jurisdiction is determined by the reliefs sought by the applicant in the processes before the court as in Section 46 [1] of the rules, he however said, having considered certain paragraphs of the statement of claim; it is the entire processes that need to be looked at.

As to whether the case was competent before the court as argued by counsel to the respondents, Justice Zenchi affirmed that the case was competent since the honest mistake on the part of the applicant counsel can be cured by the court as to the mode or method of commencement of the action under the fundamental enforcement rights rules. To Zenchi, doing otherwise would amount to visiting injustice on the part of the court which has the discretion to correct such mistakes.

Barrister Lawrence Umadu who received the judgment on behalf of Chief Akuma thanked the court for what he described as an illuminating and inciting judgment. The Imo State House of Assembly had in its resolution on Tuesday November 17, 2009 issued a warrant of arrest against the former Abia State Governor, for his failure to honour its invitation to give evidence on allegations of financial impropriety he allegedly made against Governor Ikedi Ohakim? The said warrant, directed the Inspector General of Police and the FCT Command to carry out the arrest of Kalu? But in a swift reaction, Kalu went to court challenging the action of the Imo State House of Assembly.