FG is prepared to divest 40 per cent stake in DISCOs: Fashola 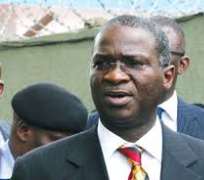 Fashola who spoke on Arise Televion in Abuja on Monday said the  government would be open to welcome new and tangible offers that would lead to it divesting its 40 per cent shares in the 11 electricity distribution companies (Disco) in the country.

According to the report monited by This Day,  Fashola said the government would look forward to having private investors bring before it good proposals that would convince it to divest part of its shares in the Discos.

He also disclosed that negotiations for the finance of the 3050 megawatts (MW) Mambilla Hydro Power Project would soon kick in following the government's award of the contract for the $5.72 billion project.

He said: “Certainly, the government wants to see more investments in the sector, you would have heard from the president and from the vice president that our role really is to enable private sector lead our economy.

“So, I would like to see an offer on the table, and you will see how I will respond to it. There is an assumption that there is an investment we are turning aback and if there is one that I am missing, please show me the direction to it.”

He further said to buttress the government's willingness to have more private sector investments in the power sector, “At the National Council on Privatisation recently, we approved the privatisation of another of the power plants – the Afam Power Plant.

So it shows you government wants to see investment, but the investments that are coming into the country are first and foremost portfolio investments on the stock market and over time you will see larger footprints settling in the real sector and infrastructure and that is when you know the economy is really back on the swing,” he asserted.

The government had in 2013 sold 60 per cent of the shares of the Discos to preferred investors during its privatisation of successor generation and distribution assets of the defunct Power Holding Company of Nigeria (PHCN).

Speaking further on government's plans in the power sector, Fashola said the plan for the Transmission Company of Nigeria (TCN) would eventually lead to it getting a new board and properly staffed.

He said the delay in the confirmation of the chairman-designate for the Nigerian Electricity Regulatory Commission (NERC) was caused by the stalemate between the Senate and the executive over the interpretation of the powers of the president with regards to appointments into executive bodies not listed in the constitution.

But he said the stalemate had not necessarily stopped the NERC from regulating the sector.

“So, there is a lot of investment coming on stream in generation, gas. New IPPs are coming up and old ones are being made efficient and so we must help the distribution companies to raise their games. One of the things we are doing is to verify their claims to debts and determine how much we are owing them and pay them.

“The other point is to ensure that government, going forward, would not owe Discos. It must budget for power in the way that it budgets for diesel and travels. We have done that in the 2017 budget, we will do it again in the 2018 budget, and enforce compliance by agencies to pay their debt.

“This will help in bringing stability to the liquidity in the power sector, ultimately for the benefit not only of the Discos and entire value chain because government as 40 per cent part-owner makes money if the Discos make money, we will get N4 out of every N10 dividend that they declare.”

On how much the government has invested so far in the power Discos considering its 40 per cent share in them, he said: “I honestly can't tell you the exact money but I think that the answer would need to be verified from the Bureau of Public Enterprises who supervises the interest of the government in those companies, I don't have those figures, but clearly you hit the nail on the head – the entire value chain has to run in sync.”

He equally claimed that he did not state that he would make the power sector work within six months as frequently alleged in public space.

On this he said: “I remember where I made that statement, I did not say the words they said I said, I was responding to residents who, after we commissioned a power plant in Lekki to serve the water works and street lights in Lekki and Victoria Island, asked me when they can get powers in their homes, and my answer to them was that we would be encroaching the jurisdiction of the Disco without permit from NERC and that if NERC gave us the permission to provide power for them, the plant was there, connecting to them was a matter of six months.”