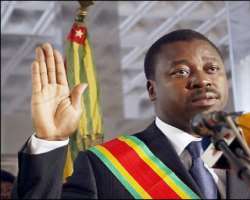 
The row in Togo over whether Togolese opposition groups should join the ruling Rally of the Togolese People (RPT), of President Faure Gnassingbe, in a credible coalition further indicates Africa's growing democracy.

Togolese democratic disputes are not, in themselves, insincere or unreasonable. On the contrary, civilized disputes are lifeblood of democracy. Constant questioning can only make applicable democracy stronger, especially in the African situation where political suppression had held sway. Against this thinking, for over 40 years democratic coalition hasn't crossed the mind of Togolese politicians. But such democratic practices have faired well for Mauritius and have seen it progress as one of the states with the best progress reports in Africa.

Some section of the opposition think Togo's March general elections were so badly rigged in favour of the RPT that it is not worth joining it. Because doing so according to them, is to give today's Africa's budding democracy a bad name and make Togo still mired in the pretense of multiparty democracy instituted in the early 1990s by Faure's father, President Eyadema, whose government ruthlessly dominated Togolese politics and maintained power almost persistently since 1967.

This has put Togo in the dark, where accountability, transparency and equality before the law, key ingredients of a civilized country at zero level. In such twisted democracy, as Africans have come to experience in the past 50 years, the grounds aren't different from the ancient anarchic one-party and self-serving military junta years, where the rule of law, human rights, accountability, and freedoms were ineffective. †

Some opposition groups (there are over ten groups) reflect that some of their colleagues have not learnt from the painful past, especially the likes of Gilchrist Olympio, whose father, Sylvanus, was violently overthrown by Eyadema and saw Togo's then promising democracy destroyed. For entering into a deal with the RPT, Togo's majority opposition parties have suspended its long-serving leader, Gilchrist Olympio. The opposition's bad feelings are understandable, since the much disputed March election have not been resolved but the fact that the RPT warmed up to a coalition is a welcome note in Africa's democratic growth.

Yes, there are impediments along the democratic path, considering Togo's and Africa's history of political mistrust worsened by Africa's Big Man syndrome (of which President Eyadema is one of the best examples). Whether to join or not, the best way is for the opposition to see a coalition as a way of working to resolve not only Togo's electoral reforms and closed politics but also its development and security, as Nigerians are attempting to do under President Goodluck Jonathan, and then use it as a springboard to further fertilize Togo's democracy and much needed progress.

While Togolese opposition could learn from the new British coalition government, Mauritius, an African home-grown case, could teach them one or two lessons. David Carment and Yiagadeesen Samy (both at Canada's Carleton University) explain that since its independence from Britain in 1968, "Mauritius," with one of the best development indicators in Africa, "has always been governed by coalition governments made up of at least two political parties."

With a population of 1.2 million, the Mauritian leadership, reflecting the African traditional leadership concept of consensus and participation, and the Mauritian reality, "adapted extremely well to its religious and ethnic diversity by promoting the concept of "unity in diversity," through regular consultations with religious organizations, government subsidies to religious groups, and the (more controversial) "best-loser system" that guarantees seats in parliament for underrepresented minorities."

In a country of 6 million people and ranked 159th among 180 countries in the 2009 United Nations Human Development Index (HDI), Togo is among the "low human development" rank. Pretty much of the reason is lack of credible democracy and political pliability. On the other hand, Mauritius, where its coalition governments have fostered political stability, resilience and good leadership, relatively high levels of human capital, the rule of law, democracy, human rights, and freedoms, especially press freedom, is ranked 81st in the HDI and is in the "high human development" rank.

Some section of the Togolese opposition may disagree with the wisdom of Gilchrist Olympio in his coalition quest, but added to "human development," a criteria that judges humanity's wellbeing such as life expectancy, infant mortality, health, literacy rates and the like, is how civilized a country is – and sometimes a simple vignette of a credible, trustful democratic coalition, as Mauritius demonstrates, capture this essence.