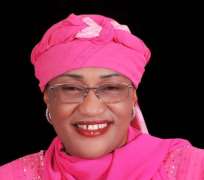 The struggle for power is an interesting phenomenon. Access to the corridors of power in Nigeria, like every other country in the world, can be highly intoxicating. It confers a level of influence and, in the case of Nigeria, comes with unimaginable affluence. Arguably, the most coveted office in the land is that of the president. Many people aspire to become president for reasons that are mostly not known to the public, and this is why the road to the election year is always flooded with interested contestants waiting for the official pointer so the race can start in earnest. Interestingly, while the whole nation is still awaiting INEC to officially declare the race open, the powerful women in the current administration have now unofficially opened the highway to 2019 elections and the race has begun.

As soon as the 2015 elections were over, politicians naturally started scheming for the next round of elections. On the one hand, some may say that was too early; on the other hand, we should realise that our politicians do not have another job. Just as any other professional takes time to plan and strategize for the next project immediately after the completion of one, politicians also plan ahead strategically. The only difference is that they sometimes claim to be serving the people. But in actual fact a significant number of our politicians lack the moral right to consider themselves as servants because they serve no one but their individual interests. Well, that’s not the concern here. I am more interested in the unofficial commencement of the 2019 electioneering.

The first set of people that started the process to the 2019 elections is the losers in the 2015 elections. For those who accepted the loss, they knew they had to start planning for the next elections in earnest. Amusingly, rather than pay attention to delivering on the current mandate, many individuals within the present government also started scheming for the perpetuation of the administration. However, the first major event that jolted politicians into the 2019 election mode was the outburst by the First Lady, Aisha Buhari when she told the world that some cabals had hijacked the presidency, and in protest she would not support her husband should he opt to contest in 2019. That event gave rise to different permutations and formations. Names of likely contenders come 2019; including Alhaji Atiku Abubakar started dropping in the media space. To a great extent, Nigerians knew the former Vice President, Atiku Abubakar had always aspired to occupy the highest office in the land. And many political watchers would bet that the former VP will surely contest in the next election.

In that regard, the assertion by the current Minister of Women Affairs and Social Development, Senator Aisha Alhassan (Mama Taraba) declaring her support for the former Vice President is a momentous event in the 2019 election race. That declaration formally set in motion the political intrigues for 2019. We have now fully commenced the politics for 2019. Let no one be deceived that 2019 is still far; it’s just about 14months to the elections, and less than 400 days.

I am not here to predict who will become the presidential candidates of the two major political parties or who will eventually win the elections. The only predictable event here is the looming implosion the ruling party will have to nip in the bud. Nevertheless, my main concern is what this political theatrics portend for Nigerians. I will start with the negative.

For a government that has largely performed below expectations in 27months of its 48months term, this might just signal the termination of developmental projects going by the precedents set by previous administrations. Since the return of democracy in 1999, this will be the first administration to enjoy election victory without the distraction of court cases; and if they could not perform to the commendation of the people, we should know that now that there will be distractions politically, nothing much can really happen again. This is because politics can be very distracting and time consuming. You have to be bothered about what your inter-party and intra-party opponents are planning, and watch the move of everyone that matters in the game. Also, politics is quite expensive; to be in the media and appear appealing to the voting populace entails lots of money, which requires politicians to pay more attention to how they will gather more funds for their campaigns. But on the positive side, there will soon be more money in the system.

At present, the PR and media practitioners will benefit more from diverse efforts to make prospective candidates appealing to the voting public. At the community level, we should expect many politicians to hurriedly execute some projects, mostly insignificant, in order to assuage the people for votes. This will continue till next year when politicians will start venturing into big time spending. When that time comes, there will be more money in the system. Until then, please go and get your PVC so you can vote for the right man or woman come 2019.