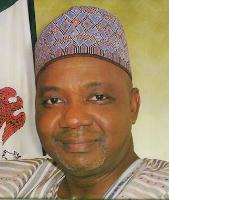 Vice President Mohammed Namadi Sambo
The Presidency yesterday summoned a reconciliatory meeting between the leadership of the Peoples Democratic Party (PDP) and the rebel PDP Reform Forum during which the presidency requested the party to lift the suspension order it clamped on members of the forum led by former Speaker of the House of Representatives Aminu Bello Masari. For their part, the rebel members were told to withdraw the court case they instituted against the party and to tone down on their criticism of the party leaders.

T
he meeting, which took place at the Presidential Villa, Abuja, was convened at the instance of Vice President Mohammed Namadi Sambo with most members of the forum and National Working Committee of the party in attendance.

At the meeting, Daily Trust learnt that Sambo pressed the National Working Committee hard to lift the suspension for proper reconciliation to take place.

A statement later issued by Sambo's spokesman Umar Sani said the vice president also requested both parties to shift their respective positions with the Working Committee lifting the suspension while members of the Forum were requested to withdraw the suit currently pending in court against the party.

During the meeting, the Forum also presented its reform proposals in the form of a document to the Working Committee for study. Part of the forum's earlier request was for the dissolution of the party's leadership on the grounds that it has not been able to lead the party on the right course.

Speaking to newsmen after the meeting, acting National Chairman of ruling party, Dr. Bello Haliru Muhammed, who led the National Working Committee members to the meeting, said it redressed a number of issues, among them how to exploit the ideas of the forum.

He said the reform agenda was not different from what the National Working Committee was pursuing, adding that the meeting was an indication of internal democracy in the PDP.

'It was a very good meeting, you know PDP always has the capacity to solve its internal problems and this is another demonstration of PDP's capacity to address issues and solve our problems. We had a good meeting under the chairmanship of the vice president and it was cordial and friendly, we are all members of the same family…

'The reform forum is members of the PDP, they have ideas which they put in writing, and it has been given to the working committee to consider. Once we meet and consider what is acceptable among what they are proposing will be presented to the decision making body of the party, the National Executive Committee.

'You know the party is in a continuous process of development and you always want to improve. So, any party member who has ideas, even if they don't belong to the reform forum, let them bring them to the National Working Committee, we will consider them and bring them to the appropriate party organs,' Haliru said.

Also speaking on outcome of the meeting, Masari said the meeting was intended to broker peace and redress their grievances. He said the Forum was bent on giving the party a new lease of life.

'You know we are all members of the PDP, so we are trying to see how we can resolve our differences but the reform will go on. We have made progress, at least we are meeting for the first time, we believe we have made progress and subsequently, we will meet in the days to come until the issue is properly resolved.' Masari said.

The party suspended 19 members of the forum in April over alleged anti-party activities. Some of suspended members included the Chairman of the Steering Committee of the reform group and former Senate President, Chief Ken Nnamani, former PDP governorship candidate for Abia State, Chief Onyema Ugochukwu as well as former Senate President Adolfus Wabara.