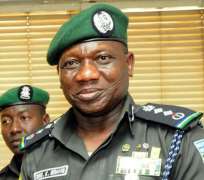 The Integrity Youth Alliance has called on the general public to disregard the information circulating in the social media, especially on WhatsApp that the Inspector General of Police, IGP Ibrahim Idris is about to marry one ASP Amina as well as promoting Police officers unreasonably.

In a press release on Wednesday, the National Coordinator of the Alliance, Kelvin Adegbenga said that some unscrupulous faceless individual has been circulating false information to bring down the Indefatigable IGP Ibrahim Idris, but they will fail as the IGP remained focus and won’t succumb to blackmail.

“Blackmailing the Inspector General of Police by bringing his personal affairs into unnecessary issues as another way to weaken the IGP has failed on arrival because IGP Idris remained undeterred, Adegbenga said.

It will be recalled that a WhatsApp message has been circulating with the headline “IGP IBRAHIM IDRIS IN ANOTHER PHASE OF SCANDAL”, with the intention of maligning the family affairs of the IGP.

The said WhatsApp message claimed that the IGP is about to embark on “a secret wedding somewhere in Kaduna today ”but our record shows that IGP Ibrahim Idris was in Abuja making presentation of the Nigeria Police Force Order 20 as amended otherwise known as the Police Duty Solicitors’ Scheme (PDSS) to the public.

“We are bold to say that those promoted by the Nigeria Police such as CP Umar Garba, CP Anambra; DCP Ali Janga and ACP Kolo Yusuf of Federal SARS, were promoted to their respective ranks based on merit as we have worked with them in the past, Adegbenga said.

The group called on the sponsor of the blackmail to desist from defaming the image of the Inspector General of Police and rather support the National Assembly by passing into Law, policies that will improve the welfare and funding of the Nigeria Police.

“We call on the Inspector General of Police to ignore the WhatsApp message and remaine focused with his rapid reformation of the Nigeria Police, Adegbenga reiterated