State of the East-West road 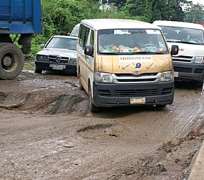 In 2006 the administration of President Olusegun Obasanjo initiated a road project to connect major cities in the Niger Delta region of Nigeria in order to aid movement and development in the country. As a result of population growth and civilisation, the road, now known as the east-west road, has become one of the most important roads in the country. The 338km road, which was awarded to Setraco Group at the cost of $1.5billion, currently connects about seven States in Nigeria. Notwithstanding its significance, it is probably the most deprived road in Nigeria. For many years it has remained an eyesore and a nightmare to helpless users. Perhaps, the only benefit attributable to the road now is its political pertinence; it is probably one of the handiest campaign tools, virtually every political office seeker in the region promises to either fix the road or influence its completion.

Every administration from Obasanjo to Buhari has promised to complete the road to no avail. Somehow, the road is often captured in every year’s capital budget estimates to the extent that it already qualifies as a recurrent expenditure. Between 2003 and 2016, over a trillion naira has been allocated to repair the road. The current administration allocated N6.55billion naira in the 2017 budget for the completion of the road, yet not much has changed since the beginning of the implementation of the budget.

Commuters spend between 2-7 hours daily navigating this road especially the Eleme-Onne axis of the road, which is probably the most decrepit section of the road. The irony of this section is that it leads to a number of significant investments in Nigeria. The Port-Harcourt refinery, Eleme Petrochemical, Onne Free Trade Zone are all located in this axis, yet it is the most dilapidated section of the East West road. How can one explain that the road that leads to the largest Oil and Gas Free Trade Zone in the world is in total dilapidation? It is so bad that Lagos to Onne by air and road could take as long as 4hours altogether. If Lagos to Port-Harcourt by air takes approximately 1hour, the other 3hours is donated to the East-West road, just to get to Onne. A Bayelsan monarch recently described the road as a national shame. And truly, we should be ashamed of ourselves as a nation.

The time wasted on this road if quantified would run into billions of naira, yet there is no pragmatic action in sight to fix it. Beyond the economic implications, the bad sections also pose a huge security risk. Armed robbers see bad sections of a highway as suitable fields of operation. Commuters that are often stuck on this road are at the mercy of criminals. People have lost their belongings to armed robbers and risk their lives in the past, just because the government has refused to do the needful.

When the current administration came into power, many thought they would immediately swing into action and apply a magic wand to redefine the state of infrastructure in the country, especially road. But so far, the rhetoric has not been different from the past. Nothing has come from the huge amount budgeted to fix the road. It is amazing how we raise and dash hope in this country without any reflection. Recently, the NDDC promised to fix failed portions of the road in 3weeks alluding to the availability of capable engineers in the commission. That declaration has only existed in the realm of mere talk, nothing has happened since.

So what exactly is the problem? Why can’t this all-important road be fixed? The contractor had complained of lack of funds. In response, reports have it that the Minister of Niger Delta asked the contractor to return to work and fix failed portions of the road. I wonder if the federal government has done the needful by providing the necessary funds required for the contractor to get back to work. If that has not been done, then the potency of that instruction is equal to naught. It is saddening that we have not been able to fix our infrastructural challenges as a nation, yet we are exceptionally blessed in many ways. The world has evolved in a way that there is always more than one solution to every problem we face today. There are many possible financing options to fix a road in Nigeria. There is the option of Public Private Partnership (PPP); we can maximise the Pension Fund, Sovereign Wealth Fund, or just concession the road, among other options.

In a supposed pragmatic move, the Rivers State Governor had prevailed on some private companies in the Onne axis to synergise with the federal government in repairing the failed portion of the road. Between INTELS and other concerned organisations, a total of NGN3billion was raised to commence palliative work on the failed section. More than a year after that event the situation has gone from bad to worse.

We need a reprioritisation that will deliver us from this national shame and we need it very fast; enough of the ministerial orders and piecemeal efforts that lack the potency to fetch a lasting solution. Let us fix this road once and be proud we did.