Ojougboh Deflate Delta PDP, As Over 14, 000 PDP Defect To APC 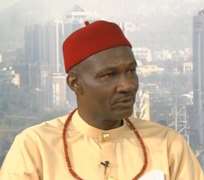 The defection of the former National Deputy Chairman of the Peoples Democratic Party (PDP), Dr Cairo Ojougboh to the All Progressives Congress (APC), has reduced the membership of PDP in Delta State.

Ojougboh, Saturday, decamped to APC with the supporters of the former national chairman of the party, Ali Modu Sheriff joined the ruling All Progressive Congress.

The over 14,000 loyalists were led into APC by former deputy national chairman of the PDP, Dr. Cairo Ojougboh, an Agbor kinsman of Governor Ifeanyi Okowa of the PDP.

Ojougboh, former member of House of Representatives, was also a former vice chairman of PDP in the South-South zone.

Minister of State for Petroleum, Dr. Ibe Kachukwu who hails from the state; natipnal vice chairman of APC, Mr. Hilliard Eta; chairman of the party in the state, Jones Erue; O'tega Emerhor and Hyacinth Enuha were among APC chieftains that received the new members at a ceremony in Agbor.

The ceremony witnessed the symbolic dumping of PDP membership cards into a waste basket and the lowering of PDP drop back banner which signaled the rejection of the umbrella party by the former members.

Addressing the mammoth crowds, Dr. Ojougboh said they were suffocated out of PDP, adding that after the Supreme Court judgment that affirmed the Ahmed Markafi national leadership, members of the Sheriff faction were sidelined.

"We asked the national body to open up the party after the unfortunate court judgment; the next thing we heard was that they were going to grant us amnesty as if we are criminals.

"When Raymond Dokpesi was nominated as member of the committee for the non-elective convention, his nomination was rejected because they said they spent money on the court judgment.

"As if that was not enough, during the Anambra State governorship primary election, Jerry Gana was made chairman of a three-man committee to midwife a transparent election but governors Ayo Fayese of Ekiti State and Nyesom Wike of Rivers State rejected it and came up with another committee that went to Anambra and handed everything to Peter Obi.

"Back here in Delta, we asked the state governor, Ifeanyi Okowa to remove impunity but what we continue to see here is a corrupt and family government. Till date, Okowa has not been able to account for the N20 billion Paris Club refund.

"We now said it is time to look for people of like minds, people of progressive ideology to meet with because I know most of you have ambitions to pursue. If we do not make a decision to belong to the progressives, most of you will miss out," Ojougboh said.

Former factional chairman of the PDP in the state, Mr. Austin Ogbaburhon told APC chieftains that the Sheriff faction is a beautiful bride, adding that they have rejected offers from other political parties and enjoined APC to negotiate well.

Receiving the new entrants, vice chairman of APC, South-South, Mr. Hilliard Eta said the new members have further brighten the party's chances to wrestle power from the PDP in the state come 2019.

"For us at the national working committee of the APC, Delta is a low hanging fruits for us to pluck but the coming of Ojougboh and his teeming supporters has made the fruits even lower for us.

"We welcome you into the party and urge you to go to your units and wards to register. Registration is free and you will add value to APC," Eta said