HOW PETROLEUM MINISTER, KACHIUKWU, USES HIS BROTHER DUMEBI, TO FLEECE THE MINISTRY OF BILLIONS 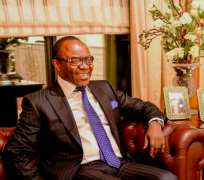 The minister of State for Petroleum Resources, Dr Emmanuel Ibe Kachiukwu and his younger brother, Dumebi have been fingered in a multibillion fraud.

Dumebi, the younger Kachiukwu, with a long history of alleged fraudulent past, acting as proxy for his minister brother, had used several private companies including family owned Dutchess Energy Limited and Accelerated Building and Platinum Plus TV, to illegally move over N1 billion to a private account in First Bank Plc with account number 2017692160.

On April 16, 2016, the Economic and Financial Crimes Commission (EFCC), in a memo to Vice president, Yemi Osinbajo, with reference number EFCC/EC/VP/02/31, made available to Pointblanknews.com, informed Osinbajo of alleged suspicious transactions involving the Kachiukwus.

According to the EFCC statement from account officers at the bank ‘’confirmed the Commission’s earlier findings that the over One Billion (N1 Billion) transferred from Dutchess Energy to the private bank investment account was not meant for investment, but rather the account was used as a conduit to transfer the money to Dumebi Kachiukwu, Dumebi Kachiukwu’s associated companies and Emmanuel Kachiukwu”

On May 20th, 2016, the Vice President informed President Muhammadu Buhari of the troubling revelations by the EFCC. The memo which is in possession of Pointblanknews.com requested the approval of Buhari “ to commence further probe and investigation of the matter involving the Honorable Mnister of State for Petroleum Resources”

Curiously, till date nothing has been head from President Buhari concerning the large scale fraud allegedly perpetrated by the Kachiukwus.

According to the EFCC’s preliminary findings, the transfer of N1 Billion from Dutchess Energy Limited by the brothers to their private account was effected on September 9, 2015. That on October 8, 2015 the sum of N50 million was transferred to the minister from the N203 Million transferred to Accelerated Building by Dutchess Energy through the First Bank Private Banking Investment Account.

That Emmanuel Kachiukwu also has a standing order on the dodgy account to pay allowances to his wife and three children, and that payment of these allowances were secured from a N100 Million secure Visa credit card and overdraft facilities of the minister with First Bank.

On September 4, 2015 one Ahmed Aminu paid the sum of N221 Million into the account of Dumebi Kachiukwu at First Bank.

The EFCC memo signed by the Chairman, Ibrahim Magu added that “the analysis conducted so far indicates that the Private Investment Account at First Bank was used as a conduit to transfer money from third parties to Dumebi Kachiukwu and Emmanuel Kachiukwu.”

Efforts to speak with the Kachikwu brothers on the alleged fraud were unsuccessful. Pointblanknews.com also tried to reach the spokesmen for the President and his Vice President to explain what action has been taken on the matter, all to no avail.