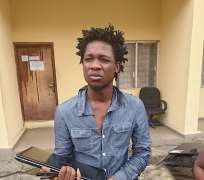 The suspects were said to have defrauded their victims of huge sums of money in different currencies posing as Americans in online dating scam.

Some of the items recovered from the suspects during the raid include six laptop computers, five mobile phones (including two iPhones) one Internet modem and four exotic cars (Toyota Venza, Toyota Corolla, Hyundai and Honda Crosstour).

The suspects will soon be charged to court after investigations are concluded.