Jonathan In Surprise 'Thank You' Visit To Saudi Arabia Over Yar'Adua 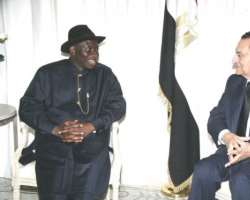 San Francisco, June 01, (THEWILL) – Nigeria’s President Goodluck Jonathan on Tuesday made a stop in Saudi Arabia to thank the King Abdullah led government for the first class medical attention it rendered the late Nigerian President Musa Yar’Adua while he was hospitalized at the Kind Faisal Specialist Hospital in the Islamic nation.
A report in Thisday, a Nigerian newspaper said the President and some members of his entourage including Foreign Affairs Minister, Mr. Odein Ajumogobia (SAN) left France on Tuesday morning at the conclusion of the 25th Africa-France Summit in Nice for Nigeria and made a stop in Riyadh before returning to Abuja on Tuesday night.

THEWILL could not reach presidential spokesman, Mr. Ima Niboro for further details on the stopover before going to press.

The President is expected to preside over the weekly Federal Executive Council meeting at the Presidential Villa on Wednesday.