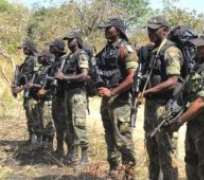 The Nigerian army on Thursday agreed to withdraw soldiers from Aba and Umuahia in Abia state.

Governor Okezie Ikpeazu, Abia state governor, made the announcement of the withdrawal at a press conference.  Troops had been deployed to the state for a military exercise tagged Operation Python Dance II.

The governor said that the withdrawal does not however affect military operations that hitherto been going on the state and other Southeast states to bolster security.

The withdrawal takes effect from tomorrow.
The withdrawal follow outcry that followed by mayhem visited by the troops on members of Biafra agitators in Abia State.