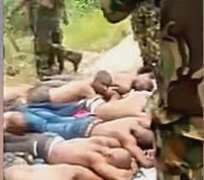 (Intersociety, Onitsha Nigeria: 14th September 2017)-The authenticity of the Army torture video discreetly and courageously taken by an ally of the Nigerian Army; who is also a concerned Nigerian has been circumstantially and independently confirmed or authenticated. An in-depth finding by our organization indicates that the video was taken in the godly hours between 9am and 2pm two days ago or on 12th September during the IPOB’s operation storm and humanly protect Prince Nnamdi Kanu and his royal father’s palace and their household located in Afara-ukwu, Umuahia, Abia State. The source of the video clip is also confirmed by a corroborative third-party who is a top leader of IPOB and the crime scene star-witness (was on the scene for more than two hours).

Further finding by the leadership of Intersociety that investigated the video, its source and environs further indicates that it was taken at the Isi-Alanwa Army checkpoint; close to the Clifford University Junction. At the Army checkpoint is a sort of Army mini Barracks using an abandoned Government building, along Umuahia-Port Harcourt Expressway. Adjacent the said mini or mobile Army Barracks is the mud water or semi swamp where the tortured IPOB members were forced after being stripped half naked and mashed and flogged with kobokos and gun buts to swim and drink from the dirty and contagious water.

On the said date, the Army checkpoint at the scene was deliberately expanded and turned into hybrid or military torture arena; manned by soldiers, navy personnel and air force personnel (brought from outside Abia State). The said hybrid military mobile torture chambers also caused a teething gridlock stretching over one kilometer. At that mobile military torture chambers were over five military trucks with commanders of the military personnel seating and watching by the bush-side and from a distance while the torture was going on.

The tortured included defenseless citizens traveling and going about their normal businesses and sympathetic IPOB members and supporters paying solidarity visits to Prince Kanu’s Umuahia palace home; quartered in five 18-seater buses in all. The tortured IPOB members and supporters were heading to Umuahia from Aba, Port Harcourt, Akwa Ibom, etc. Those who successfully made it to Umuahia were those from Anambra, Enugu, Ebonyi and Imo; using Old Orlu and Enugu-Port Harcourt Roads, etc. As was clearly shown in the video clip, the tortured first had their mobile phones and other communication devices seized and confiscated; frog-jumped and forced to lay down on bacterial and other killer germs infested road-floor, and stripped half naked.

They were also lined up and commanded to cross from the right to the left side of the Expressway to swim and drink from the contagious and dirty or mud water/mini swamp. At least, one of the torture victims was shot and dumped at a distance; by the road side to bleed to death. The video clip also showed seized and confiscated Biafra insignias, I-pads, mobile phones and other communication devices dumped on the road-floor or by the corner of the military torture scene.

Though the 3-minute video did not capture all that transpired at the scene, but members of the public are invited not only to watch the video clip again so as to confirm the above disclosures, but also manually or physically cross-check the exact location of the military roadside siege scene as disclosed and its adjacent mud water or mini swamp at the Isialangwa Junction where the named personnel of the Nigerian Armed Forces tortured hundreds of innocent Nigerians of Igbo extraction; especially those thronging to the Umuahia palace home of Prince Nwannekaenyi Okwu-Kanu (Nnamdi Kanu) for solidarity and loyalty.

Key Eyewitness Account: As a tradition that has earned us towering local, national and international reputation; even in the Nigerian Government and securitization establishments, we have always resisted attempts by some persons and groups from State actor and non State actor backgrounds to lure us into issuance of statements, reports and publications derived from unprocessed, un-investigated, unscientific and unverifiable data and stories. These we have strongly and successfully resisted till date.

That is to say our facts and records are always provable and hardly refuted anywhere in the world. In the case of the said video clip, calls for our comments have been coming to us in torrents, but we declined because we have not thoroughly processed same. Though the video clip is instantly and circumstantially tempting, inviting and seductive, but we still considered it necessary to subject it to three crime scene triangle verification and linkage; namely: crime scene- where it was recorded; crime offenders-who committed the offence and crime victims-who were victimized as well as third-party/source where the video came from .

The third-party recorder of the video is known, but which to remain discrete for security reasons. There is also a third-party corroborator and star-witness; who is also a key leader of IPOB. He got to the scene around 11am on 12th September 2017 and on sighting the military torture scene/checkpoint at Isi-Alangwa, he hid his mobile phones and other communication devices inside one of the tomato baskets belonging to his co-female traveler. For journalists of reputable backgrounds and records, Intersociety can sacrifice the pain of linking them up with the third-party corroborator/ star-witness for further authentication of the video clip; strictly on professional mindset. They can locate the scene for on-the-spot verification.

Apart from spending one hour at the military created gridlock, the star-witness/top IPOB leader also spent another hour going through rounds of torture. It took him “APAMS”-like tears to be let off and allowed to go. He moved away to a distance and observed further subjection of his comrades to military torture before he left the scene at minutes past 1pm, same 12th September 2017. The perpetrator-military personnel and their commanders later broke into small units at about 2pm and retired into nearby villages and joints. Those arrested and tortured had many of them released, while the rest were seized and further tortured to disclose the identities of their leaders to be ambushed and abducted at night in their sleep. It is unclear till date as regards the number of arrested IPOB members/supporters still being held by the military.

That is to say that the Nigerian Army’s claims of “not targeting Nigerians and infringing on their constitutional liberties and human rights except criminals” is totally a ruse and damnably incorrect. It is no longer hidden that the Nigerian Army has allowed itself to be infiltrated and hijacked by Jihadists and ethnic cleansers; masquerading as “personnel of the Nigerian Army”. This is more so when most, if not all the strategic military formations in the Southeast are manned by religiously radicalized officers of the Northern Nigeria.

For instance, the GOC 82 Division of the Nigerian Army in Enugu is headed by Major Gen Adamu I. Abubakar (Muslim); the Deputy Army Director of Information of the 82 Division is Col Sagir Musa (Muslim), the Commander of the Onitsha 302 Artillery Regiment Military Police is Lt Col M.I. Ibrahim (Muslim), the immediate past Commander of 144 Battalion of the 14 Brigade (in Ohafia); located near Aba, who is now at the 14 Brigade Headquarters is Lt Col Umar Sidi Kasim Muslim), the Brigade Commander of 14 Brigade, Ohafia is Brigadier Gen Abdul Kalifah Ibrahim (Muslim) and the Commander of the Nigerian Navel School of Finance & Logistics, Owerre-Nta, Navy Captain Abdullahi Aminu (Muslim). This is just to name but few.

We are also not unaware of the reported late night genocidal operation in some areas of Aba in the late night of yesterday/early hours of today which were reported to have started around few minutes past 12mid night. The Board Chair of our organization was woken up by several distressed calls including from foreign journalists over this. The said distressed calls started from 16minutes past 3am in early morning of today, 14th September 2017.

The areas said to have been affected include Umuode, Ariaria and TONYMAS and environs. The house-to-house raids were reportedly carried out by personnel of the Nigerian Army, forcing families including infants, nursing mothers, pregnant women, the sick and the aged to abandon their sleep and run out of their homes; spending rest of the night in bushes and other hiding places. We shall update the public on these in coming days as in whether the said genocidal operations took place or otherwise.

We shall not be surprised if these turned out to be true as it is freshly recalled that the Nigerian Army had while announcing its present genocidal operation in Igbo Land, tagged “Exercise Python Dance 11” listed its modus operandi for the atrocious operations to include “[late night] raids, cordon and search operations, anti-kidnapping drills, road blocks, check points, patrols and show of force”.

Signed:
For: International Society for Civil Liberties and the Rule of Law (Intersociety)