The Stinking Gap Between Politics And People 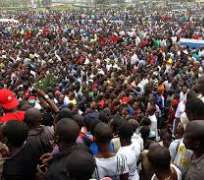 I was youthful when the military took over the political affairs in Nigeria on December 31, 1983, lasting till 1998. Killing of civilians and hounding of activists that were opposed to the whims and caprices of the military, were the first impression that I had about politics, likewise many of my ilk. Nothing more!

Many Nigerians fled the country for their dear lives. I saw a country that was moving backward, yet preaching to us pubescent as the leaders of tomorrow. I saw radical elders who did not blink before their wards in showcasing their political impoliteness, whereas young people were involving in political conflicts.

Some sane minds were afraid that we the youth then were erroneously influenced; saying that what influences a person build up his or her future. Those in this line of thought were worried that we the youth were learning radicalism from the military and there might not be respectability and rule of law in the country, even if the much touted democracy was finally achieved.

Upon democracy in 1999, I’m among the many Nigerian adults today that are asking for who destroyed the country economically, socially and politically, especially between 1999 and 2016 that we attained democracy. I’m among the adults who are dropping patriotism to question reality: The country has not moved forward from where the military left it.

The writer in me has propelled me to ask many questions in my articles pertaining to mis-governance in our country, but the answers I have gotten are not what we collectively bargained. One may think that our country is Iraq in 2002. I see cynics everywhere, not by their making, but the hardship in the country has caused some persons’ neurons. People are going gaga. Most times, I have to go miles to charge my phone with electricity generating sets in the houses of those who can afford buying fuel at the exorbitant price of N145 a litre. Electricity supply in the country is seen by the authorities as luxury, not a necessity. No one is talking about government water. The roads are sorry tales.

I am aghast that scarcity of fuel, kerosene and diesel is endemic in a country that is characterized among the 10 producers of crude oil in the world. Police are on their part collecting tips on the road, transport fare is on the increase, people are being sacked from their jobs everyday and there are no job opportunities in sight. The present government that promised change during its party’s electioneering campaigns in 2015 and was embraced by Nigerians in the Diaspora as well as the international community, is giving excuses like governments before it, why it cannot reform and transform Nigeria over two years it mounted the saddle of leadership.

The resultant of this is the hunger I see written on people’s faces in the name of democracy, more than it was in the military era. Functional education, hospital, road, and every dividends of democracy are all mirage. Yet, politicians are joining politics everyday to make money. Service to the people is not in their agenda.

There is insecurity everywhere. One wakes up every morning to note from news some hundreds of innocent people that have been killed either by insurgents that have taken killing as an occupation in the northern part of the country or Fulani herdsmen from the north massacring numbers in the south for the purpose that their cows must graze in the south. Kidnapping is rife and issues of judiciary and corruption are on the increase.

The Federal Government is recently, politically proposing a grazing bill in all the 36 states of the federation for northern cattle owners. But the southerners are objecting the agenda. They are saying that they do not see how that will translate to national development, but owners of the cows who are supposed to man how their cows are fed.

Against this backdrop, politics has made some of our people who returned from overseas to feel that they are ‘repatriates’ or tourists, because of the sordid conditions they left many years ago, have not been solved when they returned, many years after.

Every year, we clamour for change. But change has remained elusive, not minding that the project of our country should be taken seriously. The economic system is down and citizens are scampering for safety without hope.

Observers say that more than 70 per cent of the citizens are very poor. Just on July 17 2016, the Deputy President Yemi Osibanjo affirmed this in the national broadsheets, saying that 110 million Nigerians are poor; whereas the population of the country was estimated at 170 million. Imagine!

Like many of my ilk today, who were not born in 1960 when Nigeria got her independence from the British colonialists, everything is moving backward 55 years after. Our country has not learned from the woes of the past. It keeps taking backward movement and repeating the same old things that have not made us develop like the so-called developed countries of America and Britain.

A large population of our countrymen and women believe that the country has been backward due to the charlatanic approach of the political class. Against this influence, I’m thinking if there is a correlation between politics and corruption. Everyone is saying that our political elites are severely corrupt and pay just lip service to national issues that should matter.

It was politics, like in our country, that compelled the Arab Spring of 2011 that saw to the ouster of Libyan revolutionary, politician, and political theorist Muammar Muhammad Abu Minyar al-Gaddafi, commonly known as Colonel Gaddafi.

Our leaders are yet to learn from the political conflict of the Middle East in late 2010. From Tunisia, it spread all over the region in 2011, all-through Egypt, Bahrain, Yemen, Libya and Syria.

Born June 7, 1942, al-Gaddafi was politically killed on October 20, 2011. It was the same politics that saw to the death of the fifth President of Iraq, Saddam Hussein Abd al-Majid al-Tikriti. What killed al-Gaddafi was what I saw in 1990s when youth-spawned political upheaval brushed the former Soviet coalition like East Germany, Georgia, Lithuania, Kyrgyzstan, and Serbia.

Across the world, politics has destroyed many conditions that include social ecology, basic resources, social networks, safety and security. Hussein was killed by a kangaroo judgment on December 30, 2006. Born on April 28, 1937, he served in his ability from 16 July 1979 until 9 April 2003.

We saw Bosnia in the 1990s, when young people did not understand the political situation around them and that borne emotional and shared scars of ill-treatment. The youths moved for violent struggles for the social good.

That was coming after the Palestinian first intifada of the late 1980s and early 1990s. In Syria, this is the fifth year that youths have engaged in politically-motivated war, ignited by a display of foreign intrusions on the side of government and Free Syrian Army.

More than 300,000 people have been killed and millions driven from their homes in this war regarded today as the world’s bloodiest civil war. Look at the ruins created by politics in Sudan. I still remember the Nimery’s notorious September Laws in 1983, which ushered in Sudan’s route headed for Sharia Law and the equally villainous Article 152 that bullies pants-wearing females with whips amid prejudiced sentences and shrewdness.

There is politically-motivated madness in our country and this has made a lot of people to mind their businesses and, they are naive. We have been experiencing crackdowns on opposition political parties and their members.

The authorities think that the laws they enact would shape our lives, but while we most often embrace social path and decorum, the authorities don’t. Today, liberals in the Americas are calling for political fairness, while the conservatives wink. Our backwardness as Nigerians would have been averted if politicians think that politics is related to the entire masses, not only to them. Politics is life.

Imagine where government decisions that were supposed to affect the generality of the people just affect only a few opportunists. Politicians have turned politics to where people take their destinies into their hands.

Nevertheless, no matter the shoddy sides of politics to people, the world will still have Martin Luther King Jrs., who will take a position that is neither safe, nor politic, nor popular, to challenge the atrocities of politicians against their people, because conscience, not politics, tells them it is right.

We will continue to have Theodore Roosevelts, who will tell the world that in politics, it is not oppositions that count, but those unsung heroes who fight, whose faces are marred by dust and sweat and blood; who strive valiantly; who err, who come short again and again, because there is no effort without error and shortcoming; but who do actually strive to do the deeds; who know great enthusiasms, the great devotions; who spend themselves in a worthy cause; who at the best know in the end the triumph of high achievement, and who at the worst, if they fail, at least fail while daring greatly, so that their place shall never be with those cold and timid souls who neither know victory nor defeat.