Soldier in court for stealing money, phones in Apapa 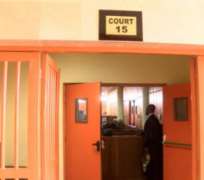 A 23-year-old soldier, Ali Sabo was arraigned on Tuesday before an Apapa Magistrates’ Court sitting in Lagos for allegedly stealing the sum of N155,000 and two phones belonging to Atere Segun and Vera Nduka.

The defendant pleaded not guilty to the two-count charges brought against him by the police.

The port prosecutor, Sergeant Adeniyi Balogun told the court that the defendant committed the offence on August 30, 2017 at sunrise along Apapa-Oshodi Expressway.

The Magistrate, Mrs Adenike Alaka granted the defendant bail in the sum of N100,000 with two sureties each in like sum.

She adjourned the case till September 28, 2017 for mention.