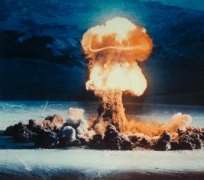 North Korea has evolved from being a regional menace to a “global threat,” the head of the UN's nuclear watchdog has said.

Yukiya Amano, head of the International Atomic Energy Authority, told CNN that North Korea's claim that it had tested a hydrogen bomb on Sunday represented a “new dimension of threat.”

Tensions have risen on the Korean Peninsula after the test at the weekend. Seoul launched a series of live drills in response and boosted the deployment of a controversial US-made missile defense system, THAAD.

“I think the North Korean threat is a global one now. In the past people believed it was a regional one, that's no longer the case,” Amano, director general of the IAEA, told CNN.

“It is a global threat now and it combines nuclear weapons and missiles.”

The head of the Comprehensive Nuclear-Test-Ban Treaty Organization, which monitors and verifies seismic and nuclear activity around the globe, said North Korea's test triggered “one of the biggest tremors ever recorded by our international monitoring system.”

“We're talking about a magnitude of six, this is the highest we've ever recorded and this is a clear indication that the nuclear weapons program with North Korea is reaching a completely different level,” Lassina Zerbo, Executive Secretary of the Vienna-based organization told CNN.

While the IAEA could not determine if the explosion came from a hydrogen bomb as North Korea claimed, Amano said the bigger yield of this latest test means “it is safe to assume North Korea is making significant progress.”

NORSAR, a Norway-based group that monitors nuclear tests, estimated an explosive yield of 120 kilotons, which means the power of 120,000 tons of TNT. South Korean officials gave a more modest estimate of 50 kilotons.

“We do not have the capacity to determine whether it was a hydrogen bomb or not,” Amano said.

“Some analysis by other organizations is ongoing but it is difficult. In light of all the experience of the IAEA following other nuclear programs of North Korea, North Korea generally does what it says it is going to do.”

The IAEA established a North Korea team this summer and the group is preparing to go back in but needs the necessary equipment and a revised plan, he said.

“North Korea is one of the countries where it's most difficult to guess their next step,” Amano added.

“It's not at the nuclear weapon stage under the treaty but it is clear that North Korea has some nuclear weapons, nuclear explosive devices and missiles.