Any attack on Igbo by northern youths is attack on me: Sultan 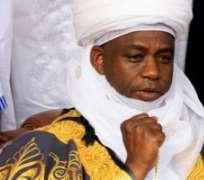 Sultan Sa'ad Abubakar has said that if anyone plans to attack the Igbo who are resident in the northern part of the country, such attack should be directed at him, first. The Sultan of Sokoto ‎The Sultan said this when the world Igbo union leader, Dr. Mishack Nnanta, accompanied by resident Igbo chiefs, paid sallah homage to him at his palace.

“If anybody or group of persons plans negative attack on Igbo, he or they should attack me first because I am against the so-called ultimatum issued by the Arewa youths that Igbo should leave the north,” he said.

Abubakar observed that “restructuring” to his understanding does not mean galvanizing or dividing Nigeria, but making “adjustments here and there for equal accommodation of all and sundry in Nigeria for equity and fair play religiously, socially and economically.”

He further observed that the agitation by some people for disintegration “cannot solve any of the problems facing the country” and that “dividing it into many parts is not the solution for the married of problems bedevilling the nation because this will lead to towns and villages clamouring to become independent.”

He suggested that the way forward was a round-table dialogue and not carrying arms which would never lead to peace. Agreeing that there were genuine complaints that border on marginalisation, the Sultan however said that the way out was peaceful resolution.

He blamed the nation's politicians for most of the problems faced by Nigerians saying. “They come to you during campaigns, promise you heaven in your house, air conditions on all roads and milk entering your mouth hourly without any effort from you. As soon as they win and go to Abuja, they start planning comfort for themselves while those from the rural areas move to state capitals, abandoning those who voted them,” he lamented.‎

Nnanta earlier said that Igbo were peace-loving Nigerians whose stalk-in-trading was engaging in ‎their businesses. “Igbo cannot leave peacefully in isolation from Nigeria. They should work towards ensuring proper integration, reconstruction as promised by Gen. Yakubu Gowon. They may agitate for creation of more states in the South-East to meet up with other geopolitical zones of the country,” he said.