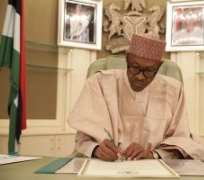 President Muhammadu Buhari may soon reshuffle his cabinet to realign it to meeting his administrations agenda.

A report by THIS DAY indicates that the mid-term cabinet reshuffle has topped the president’s priorities since his return from the United Kingdom (UK) nine days ago.

According to the report, it this impending action that may  have influenced his decision to defer last week's meeting of the Federal Executive Council (FEC), THISDAY has learnt.

According to top presidency sources, Buhari has made up his mind to rejig his cabinet very soon but is torn between moving around the current crop of ministers or dropping them completely and replacing them with new appointees.

THISDAY had exclusively reported that when Vice-President Yemi Osinbajo visited the president last month in the United Kingdom, he had sought Buhari's permission to reshuffle the cabinet.

He had also presented Buhari with a draft list for the reshuffling of the cabinet for his consideration and approval.

The president, it was gathered, however, asked his deputy to tarry a while until he returned to the country, informing Osinbajo that since the administration was midway into its tenure, it would be the only opportunity for him (Buhari) to reshuffle the cabinet.

It was on the basis of Buhari's position that Osinbajo, upon his return to the country, swore-in Prof. Stephen Ocheni from Kogi State and Alhaji Suleiman Hassan from Gombe State, who had been confirmed by the Senate as ministerial nominees, without assigning any portfolios to them.

They were eventually assigned portfolios three days before Buhari's return from the UK.

With Buhari's return since August 19, the president has been preoccupied with reshuffling his cabinet as soon as possible.

However, a presidency source confided in THISDAY that his ministers, who are all aware of the likely changes to take place, have been lobbying Buhari through their governors or close allies of the president, to either retain their ministries or be moved to other ministries that they deem more “important”.

Buhari, it was gathered, has also been holding on to the list drafted by the vice-president and has not made up his mind on whether to reshuffle the cabinet on the basis of the list, or make some alterations to the list before doing so.

The presidency source further revealed that Buhari has been counselled by those close to him to jettison the list given to him by Osinbajo completely and dissolve the cabinet so that he can bring in new hands that will be loyal to the president and his agenda.

According to the source, the situation has caused an air of uncertainty among his ministers who do not know if they are staying on or may be replaced.

This has not been helped by the fact that Buhari, THISDAY learnt, has also decided to keep the final decision close to his chest, given the growing interplay of interests.

“The cabinet would definitely be reshuffled very soon and all the ministers know that. It is for this reason they have been lobbying their governors and allies close to Mr. President since he returned from London.

“The problem is that some of these same allies have advised Mr. President to discountenance the list that was presented by Vice-President Osinbajo when he met with him last month in London.

“His allies would rather he dissolves the cabinet completely and brings in a new team that would be completely loyal to the president.

“Right now the cabinet is in a state of flux due to the uncertainty over what direction the president would go,” the source volunteered.