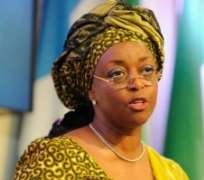 A Federal High Court in Lagos on Monday ordered permanent forfeiture of N 7, 644, 700, 000.00 belonging to former Minister of Petroleum Resources, Diezani Alison-Madueke, to the Federal Government.

The money which  is  suspected to be proceeds of illegal activities was traced by the Economic and Financial Crimes Commission to an account in a new generation bank. It is said to be part of a large amount of $153 monies allegedly stashed in several local banks by the former minister.

Justice Abdulaziz Anka presided over the court.
The ruling followed an application by the EFCC seeking the final forfeiture of the money to the federal government. This came on the heels of the interim forfeiture order by Justice  Chuka Obiozor of the Federal High court in which he mandated the Commission to public a notice in the media requesting any interested party to show cause within two weeks, why the money should not be permanently forfeited to the federal government.

At the hearing on Monday, Counsel to EFCC, Rotimi Oyedepo, informed the Court that the interim order had been published in a national newspaper as directed and no one contested the forfeiture order. Urging the court to order a permanent forfeiture of the funds, Oyedepo said, “ I pray my Lord to forfeit this money to the Federal Government of Nigeria for it to be utilized for Nigerians, since no one is willing to contest this application.

Delivering  his judgement on the application, Justice Anka held that, “In the face of the publication, which I find before me, and there being no responses from any interested party, I have no other option but to grant the orders as prayed”. This final forfeiture is coming few days after the same Judge ordered an interim forfeiture of properties worth $21,392,224 linked to the former minister.