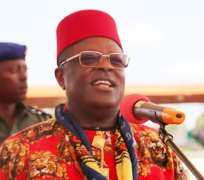 On Saturday, 26th August, 2017, the entire population of Ohaukwu Local Government Area emptied itself into the spacious pavillion of the council secretariat creating a sea of human heads which included the pioneer civilian governor of Ebonyi state and the patron of Ohaukwu politics, Senator Sam Egwu who was represented by Professor John Eke, other leaders of thought, the men, youths and women; the aged and the young as well as the elites, traditional rulers and the senior citizens. The occasion was the solidarity rally in support of the bid of the Governor of Ebonyi state, His Excellency, Chief David Nweze Umahi, to secure a $150 million loan from the consortium of African Development and Jaiz banks for the reconstruction of the completely dilapidated and collapsed one hundred and sixty kilometer Abakaliki ring road [with its spur areas] which was constructed about four decades ago. This rally was necessitated by the politicization of the Abakaliki ring road project by some elements of the opposition who were yet to forgive Ebonyi electorate whose only sin was that they rejected those fringe politicians in the 2015 polls. Consequently, those unpatriotic opposition elements who want Ebonyi people to continue to suffer held nucturnal meetings in a hotel in Abuja to frustrate a loan which had already been approved by the Federal Government led by a party which these mischief-makers claimed to belong to. They had allegedly taken their unpatriotic bid to the courts. The height of the foolhardiness of the opposition to the loan and the Abakaliki ring road project was that a member of the Federal Executive Council from Ebonyi state who was part of the FEC approval is leading this unwholesome bid to frustrate a loan he lacked reasons and courage to oppose in the Federal Executive Council! The Abakaliki ring road support rally which held concurrently in all the local government areas in Ebonyi state to gauge the feeling of ordinary Ebonyi masses on both the loan and the Abakaliki ring road project was markedly different in Ohaukwu Local Government Area in many ways: It was well-attended by every stratum of Ohaukwu population; it was an opportunity for the aged to re-live the relief and other opportunities brought to them by the ring road when it was done decades ago and to highlight the importance of the loan and the positive implications of the ring road rehabilitation project as conceived by visionary Governor Umahi; as well as an opportunity for the masses to put their imprimatur on the ADB/Jaiz bank loan and the Abakaliki ring road project which are by all ramifications necessary for the development of Ebonyi state.

Setting the ball rolling, the Commissioner for Lands, Survey and Housing in Ebonyi state, Chief Sunday Inyima, who chaired the occasion traced the history of the 37-year old Abakaliki ring road from 1980 when Chief Jim Ifeanyichukwu Nwobodo who was the charismatic governor of the old Anambra state decided to abate the criminal neglect of the old Abakaliki senatorial district. According to Inyima, "Abakaliki ring road which connects eight of the 13 council areas that make up Ebonyi state is important because it made our rural communities accessible and eased the burden of evacuation of our farm produce to places of better offers. Ebonyi people recall that those who are opposing this facility are the very people who introduced bonds and loans in the administrative lexicon of Ebonyi state."

When Chief Inyima explained the details of the Abakaliki ring road project as conceived by Governor Umahi which included the extension of the ring road through Ngbo axis to Ishielu LGA and the development of spur areas like adjoining schools, health facilities and other public utilities, jubilant noises from the people rend the air in praise and celebration of Governor Umahi's kind intentions for Ebonyi people.

In his own speech, the chairman of Ohaukwu Local Government Area, Barr Clement Omekannaya Odaa pointed out the importance of Abakaliki ring road project to the ordinary Ohaukwu man, nay Ebonyi man. In Barr Odaa's words, "The Abakaliki ring road is very important because it is one project that ties the whole of Ebonyi state together. It is instructive that after the road was built about four decades ago before the creation of Ebonyi state, Governor David Umahi, 'the Roadmaster', is the first governor in the history of Ebonyi state to pay genuine attention to the ring road. Ohaukwu people will be the greatest beneficiaries of the ring road project because a larger distance of the about 160 kilometer road lies within the precincts of Ohaukwu LGA." The Ohaukwu council boss went on to berate the rejected politicians who were opposing the project and the loan describing such people as unpatriotic people, enemies of Ebonyi masses as well as poor students of history. According to Barr Omekannaya Odaa, "Ebonyi people will recall that those opposing this project and the loan facility were the very first to borrow billions of naira from the capital market in 2012 which they squandered in white elephant, uncompleted and abandoned projects that still stand as monuments of corruption on Ebonyi soil even now. These people therefore lack the moral qualifications to speak on this subject matter. The opponents of the Abakaliki ring road project are marchants of vendetta and fringe politicians who are angry over their rejection by Ebonyi people in the 2015 general elections and so want Ebonyi people to continue to suffer neglect. Their unholy plot shall fail again like it did in 2015 because God and the people of Ebonyi state are with Governor David Nweze Umahi." Odaa concluded.

Representatives of the women folk, Hon. (Mrs.) Bene Obba, and the youths Mr Uche Agboke in their separate speeches condemned the actions of the cabal that were attempting to frustrate the Abakaliki ring road project and that the actions of these political rejectees have given them out as the real enemies of the people; thus serving as a vindication for Ebonyi electorate who had rejected them in the 2015 polls.

One of the many university dons in the rally, Dr. Chibugo Oketa, explained the basis of his support in the following words: "my support for Governor Umahi's bid is premised on two-pronged facts: One, the Abakaliki ring road is so important​that without it, Ebonyi cannot be said to be developing. Yes, much work has been done by Umahi on the state capital, satellite towns and some rural communities, but this road is a necessary development-indicator which will channel the impact of our developmental strides as a people to the hinterlands by curbing rural-urban migration. Two, present economic realities make the loan imperative. So, the loan is better taken by a man whose knack for durable projects is praised by the international community and copied by his colleagues from other states without regard to party affiliation."

In an interview, a veteran labour leader and immediate past chairman of Trade Union Congress in Ebonyi state, Comrade Oduma stressed that "given the economic situation in the country, the significance of the Abakaliki ring road in the lives of Ebonyi masses and the degree of dilapidation on the 37-year old road, every sane and patriotic Ebonyian irrespective of political or ideological affiliations should support Governor Umahi to obtain the financial facility and reconstruct the ring road." Comrade Oduma expressed shock that any Ebonyi man for whatever reason was working against the plan to reconstruct the Abakaliki ring road. He charged Governor Umahi to ignore them and go on with the development plan asserting that posterity will be kind to the people's governor.

When the matter as to whether Governor Umahi should go ahead to obtain the $150 million ADB/Jaiz bank loan for the purpose of reconstructing the about 160 kilometer Abakaliki ring road was put to vote, the people responded with a long-drawn and thunderous "aye!" To round off the solidarity rally, Ohaukwu leaders, men, women and youths numbering close to a million appended their signatures to a memo authorizing Governor Umahi to take the loan facility on behalf of Ebonyi people for the Abakaliki ring road project. Investigations reveal that Ebonyi people across the local government areas equally appended their signatures to the memorandum in support of the loan and the project. This uncensored exercise showed that Umahi had the support of Ebonyi masses who loved the projects of the Divine Mandate administration; and no amount of preachments to the contrary could sway them. It also signified that the opponents of the Abakaliki ring road project loan were out of tune and worked at cross-purposes with Ebonyi masses.

Ebonyi state is one of the ten states which had gotten Federal Government approval to obtain loans from the consortium of African Development and Jaiz banks for the purpose of developmental projects. Ebonyi state's loan application which is for $150 million is one of the lowest amounts.