Why Sen. Misau Is After IGP Idris

…….How he has spent over N300 million projecting his in-law to become the IGP
By Swift Reporters 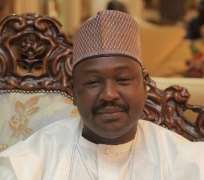 Since President Buhari appointed IGP Ibrahim K. Idris as the Inspector General of Police after the approval of the Council of State at the State House, Abuja in June 2016, Senator Isah Hamma Misau has set in motion to bring down the IGP Ibrahim K. Idris.

Swift Reporters investigation revealed that Senator Isah Hamma Misau has been projecting his in-law, an AIG currently a teaching staff at National Institute for Policy and Strategic Studies – Kuru (NIPSS) to be the Inspector General of Police after IGP Solomon Arase (rtd).

Investigation by Swift Reporters indicate that Senator Isah Misau has spent closely 300million Naira in ensuring that his in-law becomes the Inspector General of Police.

When all his effort failed with the confirmation of IGP Ibrahim K. Idris as the Inspector General of Police by the Council of State, Sen, Isah Misau has been using some officers within the Nigeria Police to bring about different unsubstantial allegations against IGP Ibrahim Idris.

The purpose of Sen. Misau projection of his in-law for the position of the IGP is to clear his criminal records in the Force. From available record, Senator Isah Misau, was an Ex- Police Officer; his real name in the Police is DSP Mohammed Isa Hamman, with Police number AP No. 57300. He left the Nigeria Police Force at the rank of Deputy Superintendent of Police after being charged with several acts of serious misconducts, unprofessional wrong doings contrary to discipline and other discreditable improper behaviors unbecoming of a Police officer and that are inimical to image of the Nigeria Police Force, which can lead to dismissal or compulsory retirement from the Force.

Further information also revealed that he was under Pending Disciplinary Matter (PDM), to appear and face Force Disciplinary Committee (FDC) before he hurriedly exited unceremoniously from the Force.

Swift Reporters investigations shows that Sen Misau must have been following his father’s step, a retired AIG who has a damaging records of corruption and Police women scandals in the Force.

It is on record that Senator Isah Hamma Misau refused to appear before the Special Investigation Panel set up by the Inspector General of Police to investigate complaints and allegations credited to him as reported on Page 3 of Daily Trust of 10th August, 2017 captioned “Police Officers pay bribe for special promotion –Senator”.

In the said publication, Senator Isah Misau alleged that he has received several petitions and complaints emanating from Police Officers on allegations of payment of money for special promotion.

Senator Isah Misau’s appearance before the Committee would have ensured that appropriate judicial action and other punishments melted out to erring officers charged with the allegations as it is appropriate in line with the provisions of Public Service Rules Section 030401 (j) (k) and other statutory enabling Laws/Acts.

Those who worked with Sen. Misau when he was still serving in the Force said his second name is corruption. A Police officer who decide to remain anonymous said that he paid huge sum of money to ensure that he worked consecutively with three FCT Ministers as an ADC; starting with Aliyu Modibbo Umar, Adamu Aliero and Bala Mohammed.

Another Police Officer who begged not to be named said that promotions in the Nigeria Police is not for sale but based on merit.

“All the officers and other Ranks and Files IGP Idris has promoted merited their ranks, they records are there for the people to see including Sen. Misau, he said.

“If Senator's phone records are checked, it will reveal the identities of officers giving him false information which he is reeling out to the media ignorantly. Senator has been receiving text messages and e-mails recently from some unidentified officers. Idris is a refined officer, Senator just want his in-law to become the IGP by all means so as to clear his damaging records in the Police Force,